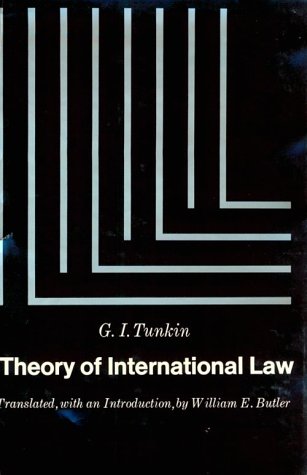 The 1970s promised important readjustments in relations among the great powers, perhaps a reconstituted Europe and Asia, as well as a possible new role for "third world" countries. National attitudes toward the law of nations both shaped and reflected developments of this nature. As a great power, the Soviet Union was a principal actor in what transpired, but until now there has been no systematic exposition in the English language of how Soviet jurists regarded the world legal order.

The present volume, published in Moscow in 1970, is the most profound and comprehensive study of international legal theory yet produced by a Soviet jurist. Its author, who holds the Chair of International Law at Moscow State University and for many years was the legal adviser to the USSR Ministry of Foreign Affairs, is widely credited with elaborating the juridical underpinnings of peaceful coexistence in the USSR from the mid-1950s. This book, earlier versions of which have appeared in Eastern and Western Europe, contains the fullest statement of his views.

For this American edition, Tunkin has brought his book up to date and Dr. Butler has supplied an introduction, a translation note, a list of the author's publications, and a glossary of Russian international legal terms.

This is a major work on the theory of international law--the first such ever to be published by a Soviet writer. The author is not only a scholar of world-wide reputation but also has had enormous practical experience as legal adviser of the Soviet Ministry of Foreign Affairs. His main theme is that international law can play an important creative role in strengthening peaceful international relations. His polemics in favor of Soviet foreign policy--including the occupation of Hungary in 1956 and of Czechoslovakia in 1968--may be a necessary price to pay for the more fundamental task of the book, which is to show that Marxist-Leninist theory supports a view of international law as a dynamic process of reaching agreement among conflicting sovereign states. Dr. Butler and the Harvard University Press are to be congratulated for bringing this translation to the English-reading public.
--Harold J. Berman (Story Professor of Law, Harvard Law School)

Book Description Hardcover. Condition: Good. No Jacket. Item is in good condition. Some moderate creases and wear. This item may not come with CDs or additional parts including access codes for textbooks. This may not have a dust jacket. Might be an ex-library copy and contain writing/highlighting. Photos are stock pictures and not of the actual item. Seller Inventory # DS-0674880013-3