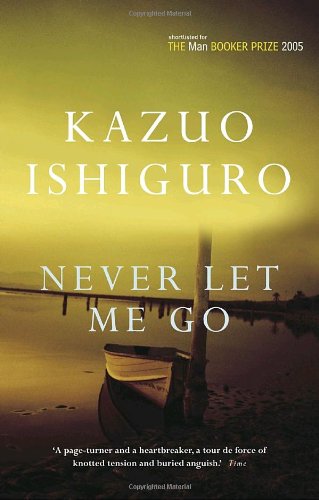 From the Booker Prize-winning author of The Remains of the Day and When We Were Orphans, comes an unforgettable edge-of-your-seat mystery that is at once heartbreakingly tender and morally courageous about what it means to be human.

Hailsham seems like a pleasant English boarding school, far from the influences of the city. Its students are well tended and supported, trained in art and literature, and become just the sort of people the world wants them to be. But, curiously, they are taught nothing of the outside world and are allowed little contact with it.

Within the grounds of Hailsham, Kathy grows from schoolgirl to young woman, but it’s only when she and her friends Ruth and Tommy leave the safe grounds of the school (as they always knew they would) that they realize the full truth of what Hailsham is.

Never Let Me Go breaks through the boundaries of the literary novel. It is a gripping mystery, a beautiful love story, and also a scathing critique of human arrogance and a moral examination of how we treat the vulnerable and different in our society. In exploring the themes of memory and the impact of the past, Ishiguro takes on the idea of a possible future to create his most moving and powerful book to date.

All children should believe they are special. But the students of Hailsham, an elite school in the English countryside, are so special that visitors shun them, and only by rumor and the occasional fleeting remark by a teacher do they discover their unconventional origins and strange destiny. Kazuo Ishiguro's sixth novel, Never Let Me Go, is a masterpiece of indirection. Like the students of Hailsham, readers are "told but not told" what is going on and should be allowed to discover the secrets of Hailsham and the truth about these children on their own.

Offsetting the bizarreness of these revelations is the placid, measured voice of the narrator, Kathy H., a 31-year-old Hailsham alumna who, at the close of the 1990s, is consciously ending one phase of her life and beginning another. She is in a reflective mood, and recounts not only her childhood memories, but her quest in adulthood to find out more about Hailsham and the idealistic women who ran it. Although often poignant, Kathy's matter-of-fact narration blunts the sharper emotional effects you might expect in a novel that deals with illness, self-sacrifice, and the severe restriction of personal freedoms. As in Ishiguro's best-known work, The Remains of the Day, only after closing the book do you absorb the magnitude of what his characters endure. --Regina Marler

Kazuo Ishiguro was born in Nagasaki, Japan, in 1954 and now lives in London, England. Each of his understated, finely wrought novels has been published to international acclaim. He was in both of Granta’s Best of Young British Novelists anthologies, and won the Booker Prize at thirty-four for Remains of the Day.