Items related to The Passage of Power: The Years of Lyndon Johnson

Caro, Robert A. The Passage of Power: The Years of Lyndon Johnson 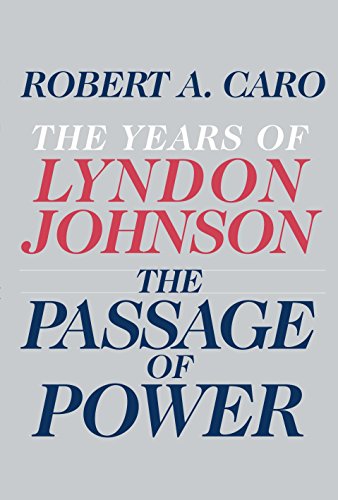 Book Four of Robert A. Caro’s monumental The Years of Lyndon Johnson displays all the narrative energy and illuminating insight that led the Times of London to acclaim it as “one of the truly great political biographies of the modern age. A masterpiece.”

The Passage of Power follows Lyndon Johnson through both the most frustrating and the most triumphant periods of his career—1958 to1964. It is a time that would see him trade the extraordinary power he had created for himself as Senate Majority Leader for what became the wretched powerlessness of a Vice President in an administration that disdained and distrusted him. Yet it was, as well, the time in which the presidency, the goal he had always pursued, would be thrust upon him in the moment it took an assassin’s bullet to reach its mark.

By 1958, as Johnson began to maneuver for the presidency, he was known as one of the most brilliant politicians of his time, the greatest Senate Leader in our history. But the 1960 nomination would go to the young senator from Massachusetts, John F. Kennedy. Caro gives us an unparalleled account of the machinations behind both the nomination and Kennedy’s decision to offer Johnson the vice presidency, revealing the extent of Robert Kennedy’s efforts to force Johnson off the ticket. With the consummate skill of a master storyteller, he exposes the savage animosity between Johnson and Kennedy’s younger brother, portraying one of America’s great political feuds. Yet Robert Kennedy’s overt contempt for Johnson was only part of the burden of humiliation and isolation he bore as Vice President. With a singular understanding of Johnson’s heart and mind, Caro describes what it was like for this mighty politician to find himself altogether powerless in a world in which power is the crucial commodity.

For the first time, in Caro’s breathtakingly vivid narrative, we see the Kennedy assassination through Lyndon Johnson’s eyes. We watch Johnson step into the presidency, inheriting a staff fiercely loyal to his slain predecessor; a Congress determined to retain its power over the executive branch; and a nation in shock and mourning. We see how within weeks—grasping the reins of the presidency with supreme mastery—he propels through Congress essential legislation that at the time of Kennedy’s death seemed hopelessly logjammed and seizes on a dormant Kennedy program to create the revolutionary War on Poverty. Caro makes clear how the political genius with which Johnson had ruled the Senate now enabled him to make the presidency wholly his own. This was without doubt Johnson’s finest hour, before his aspirations and accomplishments were overshadowed and eroded by the trap of Vietnam.

In its exploration of this pivotal period in Johnson’s life—and in the life of the nation—The Passage of Power is not only the story of how he surmounted unprecedented obstacles in order to fulfill the highest purpose of the presidency but is, as well, a revelation of both the pragmatic potential in the presidency and what can be accomplished when the chief executive has the vision and determination to move beyond the pragmatic and initiate programs designed to transform a nation. It is an epic story told with a depth of detail possible only through the peerless research that forms the foundation of Robert Caro’s work, confirming Nicholas von Hoffman’s verdict that “Caro has changed the art of political biography.”

Amazon Best Books of the Month, May 2012: In the fourth volume of Caro’s ambitious, decades-long biographic exploration, Lyndon Johnson finally reaches the White House. At 600-plus pages, it’s a brick of a book, but it reads at times like a novel, and a thriller, and a Greek tragedy. Caro's version of JFK's assassination is especially chilling, and the characters—not just LBJ, but the Kennedys and the power brokers of Washington --are downright Shakespearean. --Neal Thompson

For his biographies of Robert Moses and Lyndon Johnson, Robert A. Caro has twice won the Pulitzer Prize for Biography, has three times won the National Book Critics Circle Award, and has also won virtually every other major literary honor, including the National Book Award, the Gold Medal in Biography from the American Academy of Arts and Letters, and the Francis Parkman Prize, awarded by the Society of American Historians to the book that best “exemplifies the union of the historian and the artist.” In 2010 President Barack Obama awarded Caro the National Humanities Medal, stating at the time: “I think about Robert Caro and reading The Power Broker back when I was twenty-two years old and just being mesmerized, and I’m sure it helped to shape how I think about politics.” In 2016 he received the National Book Award for Lifetime Achievement. The London Sunday Times has said that Caro is “The greatest political biographer of our times.”

Caro’s first book, The Power Broker: Robert Moses and the Fall of New York, everywhere acclaimed as a modern classic, was chosen by the Modern Library as one of the hundred greatest nonfiction books of the twentieth century. It is, according to David Halberstam, “Surely the greatest book ever written about a city.” And The New York Times Book Review said: “In the future, the scholar who writes the history of American cities in the twentieth century will doubtless begin with this extraordinary effort.”

The first volume of The Years of Lyndon Johnson, The Path to Power, was cited by The Washington Post as “proof that we live in a great age of biography . . . [a book] of radiant excellence . . . Caro’s evocation of the Texas Hill Country, his elaboration of Johnson’s unsleeping ambition, his understanding of how politics actually work, are—let it be said flat out—at the summit of American historical writing.” Professor Henry F. Graff of Columbia University called the second volume, Means of Ascent, “brilliant. No review does justice to the drama of the story Caro is telling, which is nothing less than how present-day politics was born.” The London Times hailed volume three, Master of the Senate, as “a masterpiece . . . Robert Caro has written one of the truly great political biographies of the modern age.” The Passage of Power, volume four, has been called “Shakespearean . . . A breathtakingly dramatic story [told] with consummate artistry and ardor” (The New York Times) and “as absorbing as a political thriller . . . By writing the best presidential biography the country has ever seen, Caro has forever changed the way we think about, and read, American history” (NPR). On the cover of The New York Times Book Review, President Bill Clinton praised it as “Brilliant . . . Important . . . Remarkable. With this fascinating and meticulous account Robert Caro has once again done America a great service.”

“Caro has a unique place among American political biographers,” The Boston Globe said . . . “He has become, in many ways, the standard by which his fellows are measured.” And Nicholas von Hoffman wrote: “Caro has changed the art of political biography.”

Born and raised in New York City, Caro graduated from Princeton University, was later a Nieman Fellow at Harvard University, and worked for six years as an investigative reporter for Newsday. He lives in New York City with his wife, Ina, the historian and writer.

Book Description Hardcover. Condition: New. Illustrated. 7th Printing. A FINE Hardcover with a FINE dustjacket. AS NEW. All dustjackets wrapped in Archival protection, and delivery confirmation with all our orders!. Seller Inventory # MD1-441

The Passage of Power: The Years of Lyndon Johnson Hardcover

The Passage of Power Format: Hardcover

The Passage of Power: The Years of Lyndon Johnson (Hardcover)

Book Description Hardcover. Condition: new. Hardcover. A publishing event: the fourth volume in Robert Caro&#039;s monumental biography, The Years of Lyndon Johnson, which began with the best-selling and prize-winning &quot;The Path to Power, Means of Ascent, &quot;and &quot;Master of the Senate.&quot; &quot;The Passage of Power&quot; follows Johnson through both the most frustrating and the most triumphant periods of his career. It tells the story of his volatile relationship with John Kennedy and Robert Kennedy during the fight they waged for the 1960 Democratic nomination for president and through Johnson&#039;s unhappy vice presidency. It gives us for the first time the story of the assassination from the viewpoint of Lyndon Johnson himself. And with the depth of insight, the profound grasp of both the life and times of his subject that Robert Caro has consistently brought to this mesmerizing biography, it reveals what it was like to suddenly become president in a time of great crisis&mdash;an assumption of presidential power unprecedented in American history; how he stepped, unprepared, into the presidency and within weeks forced through Congress bills on the budget and civil rights that it had determined to let die; how through his singular political genius he set out to make the presidency his own, and to fulfill the highest purpose of the office. It is Johnson&#039;s finest hour, before his aspirations and his accomplishments were overshadowed and eroded by the trap of Vietnam. The fourth volume in Caro&#039;s monumental biography of Lyndon Johnson follows Johnson through his volatile relationship with John and Robert Kennedy in the fight for the 1960 Democratic nomination for president and through Johnson&#039;s unhappy vice presidency. Shipping may be from multiple locations in the US or from the UK, depending on stock availability. Seller Inventory # 9780679405078

The Passage of Power

Shipping: US$ 4.92
From United Kingdom to U.S.A.
Destination, rates & speeds