Items related to Refuge: An Unnatural History of Family and Place

Refuge: An Unnatural History of Family and Place 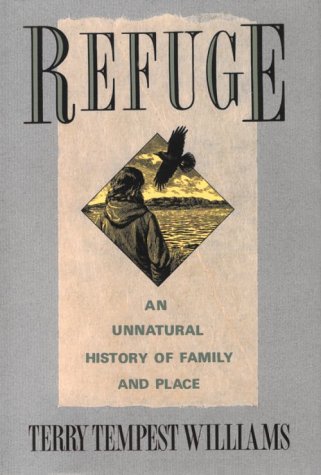 In the spring of 1983 Terry Tempest Williams learned that her mother was dying of cancer. That same season, The Great Salt Lake began to rise to record heights, threatening the herons, owls, and snowy egrets that Williams, a poet and naturalist, had come to gauge her life by. One event was nature at its most random, the other a by-product of rogue technology: Terry's mother, and Terry herself, had been exposed to the fallout of atomic bomb tests in the 1950s. As it interweaves these narratives of dying and accommodation, Refuge transforms tragedy into a document of renewal and spiritual grace, resulting in a work that has become a classic.
From the Trade Paperback edition.

The only constants in nature are change and death. Terry Tempest Williams, a naturalist and writer from northern Utah, has seen her share of both. The pages of Refuge resound with the deaths of her mother and grandmother and other women from cancer, the result of the American government's ongoing nuclear-weapons tests in the nearby Nevada desert. You won't find the episode in the standard history textbooks; the Feds wouldn't admit to conducting the tests until women and men in Utah, Nevada, and northwestern Arizona took the matter to court in the mid-1980s, and by then thousands of Americans had fallen victim to official technology. Parallel to her account of this devastation, Williams describes changes in bird life at the sanctuaries dotting the shores of the Great Salt Lake as water levels rose during the unusually wet early 1980s and threatened the nesting grounds of dozens of species. In this world of shattered eggs and drowned shorebirds, Williams reckons with the meaning of life, alternating despair and joy.

"Remarkable....Her demonstration of how deeply human emotional life can become intertwined with a particular landscape could not be more relevant to our lives."--Barry Lopez

"Profoundly moving...one of the most significant environmental essays of our time."--Kansas City Star

1. Refuge: An Unnatural History of Family and Place

3. Refuge: An Unnatural History of Family and Place