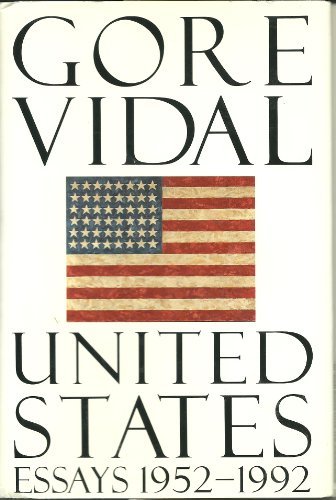 From the age of Eisenhower to the dawning of the Clinton era, Gore Vidal’s United States offers an incomparably rich tapestry of American intellectual and political life in a tumultuous period. It also provides the best, most sustained exposure possible to the most wide-ranging, acute, and original literary intelligence of the post—World War II years. United States is an essential book in the canon of twentieth-century American literature and an endlessly fascinating work.
From the Trade Paperback edition.

"In 114 essays written over a period of forty years, Gore Vidal has shown himself to be a masterly, learned, and percipient observer of an unparalleled range of subjects. United States: Essays, 1952?1992 assesses such diverse matters as modern French fiction, the Kennedys, underappreciated writers like Thomas Love Peacock, and the American attitude toward sex. He writes tenderly of authors and people he cherishes-Eleanor Roosevelt, Tennessee Williams, William Dean Howells. Whatever his subject, he addresses it with an artist's resonant appreciation, a scholar's conscience, and the persuasive powers of a great essayist."
--Citation for the 1993 National Book Award

"Gore Vidal, essayist; so good that we cannot do without him. He is a treasure of the state."
--R. W. B. Lewis, New York Times Book Review

"Gore Vidal is the master essayist of our age, and we should thank the gods that we still have him to kick us around. Long may he flourish."
--Michael Dirda, Washington Post Book World

"A marvelous compendium of sharp wit and independent judgment that confirms his status as a man of letters."
--Publishers Weekly

Gore Vidal is the author of twenty-two novels, five plays, many screenplays and short stories, more than two hundred essays, and a memoir. His most recent novel is The Golden Age, and his new essay collection, The Last Empire: Essays 1993?2000, has just been published.
From the Trade Paperback edition.