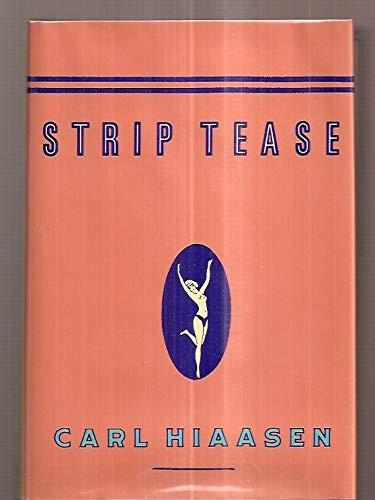 Suspense and hilarity combine with greed and political corruption in the tale of a Florida stripper, a sex-obsessed congressman, a heart-of-gold bouncer, a political "fixer," and a touch of blackmail. 60,000 first printing. Lit Guild Alt. Tour.

At the Eager Beaver, a topless bar in Fort Lauderdale, former FBI clerk Erin Grant dances nightly to pay for legal fees in her custody fight for her young daughter. There David Dilbeck, a U.S. Congressman owned by the state's sugar interests is recognized by a regular who is infatuated with Erin and initiates a blackmail plan to influence her court case. The resulting mayhem, occurring in election year, involves machinations up to the highest state level, a poignant custody battle and murder.

Congressman David Dilbeck has a bad problem. "I should never," he says, "be around naked women."  And late one night, at a gaudy Fort Lauderdale strip joint, Dilbeck loses control. He leaps onto the stage with the performers and proceeds to demonstrate his affections in a most unconventional way. The congressman barely escapes the scene, but not before being recognized by an odd little customer known as Mr. Peepers - an unlikely blackmailer, but (it turns out) a cunning one.  From the staid corridors of Congress to the sweltering cane fields of Lake Okeechobee, from a topless wrestling pit to a sunken Guatemalan banana boat, STRIP TEASE is a maniacally inventive and suspenseful tale that resonates with the furious intelligence, merciless characterization and savage good humor that we've come to expect from Carl Hiaasen.

Book Description Hardcover. Condition: New. Dust Jacket Condition: New. 1st Edition. SIGNED by HIAASEN ON THE TITLE PAGE - FIRST EDITION/THIRD PRINTING. NEW & UNREAD - SPINE HAS NOT BEEN CRACKED - no flaws or defects - Hardcover in Dust Jacket as issued. DUST JACKET IN PROTECTIVE BRODART COVER - A VERY COLLECTIBLE COPY OF THIS BOOK - PHOTOS OF THE ACTUAL BOOK SENT UPON REQUEST. ALL BOOKS HAVE BEEN BOXED IN CLIMATE CONTROLLED STORAGE AND HAVE NOT BEEN TOUCHED BY ANY OTHER HUMAN THAN ME FOR AT LEAST THE LAST 10 YEARS - ALL BOOKS ARE SEALED AND BUBBLE WRAPPED AND SHIPPED IN BOXES - YOU CAN BUY HERE WITH CONFIDENCE KNOWING THAT A BUNCH OF STRANGERS HAVE NOT HANDLED YOUR BOOK - PHOTOS POSTED WITH OUR BOOKS ARE STOCK AND DO NOT NECESSARILY REFLECT CONDITION OR EDITION OF BOOK OFFERED FOR SALE. WE DO NOT POST THE PHOTOS OF THE ACTUAL BOOK -. Signed by Author(s). Seller Inventory # 007639

Book Description Hardcover. Condition: New. No Jacket. 1st Edition. SIGNED personally by Carl Hiaasen directly on the title page, NOT signed to anyone. ADVANCE READING COPY. First Edition, First Printing. Softcover. This is an extremely scarce Advance Reading Copy (ARC). It is in softcover and is released before the first edition. ARCs are sent to people in the book business to promote advance sales before the official release date of the hardback. Book is brand new and unread, opened only to be signed. No dust jacket as issued. Pictorial covers. This is a beautiful and RARE autographed copy for collectors. Makes a great gift!. Signed by Author(s). Seller Inventory # 000528