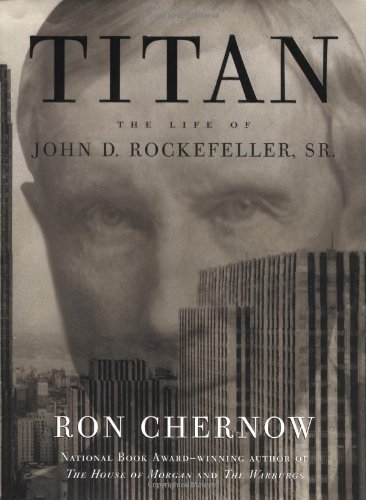 John D. Rockefeller, Sr.--history's first billionaire and the patriarch of America's most famous dynasty--is an icon whose true nature has eluded three generations of historians. Now Ron Chernow, the National Book Award-winning biographer of the Morgan and Warburg banking families, gives us a history of the mogul "etched with uncommon objectivity and literary grace . . . as detailed, balanced, and psychologically insightful a portrait of the tycoon as we may ever have" (Kirkus Reviews). Titan is the first full-length biography based on unrestricted access to Rockefeller's exceptionally rich trove of papers. A landmark publication full of startling revelations, the book will indelibly alter our image of this most enigmatic capitalist.
Born the son of a flamboyant, bigamous snake-oil salesman and a pious, straitlaced mother, Rockefeller rose from rustic origins to become the world's richest man by creating America's most powerful and feared monopoly, Standard Oil. Branded "the Octopus" by legions of muckrakers, the trust refined and marketed nearly 90 percent of the oil produced in America.
Rockefeller was likely the most controversial businessman in our nation's history. Critics charged that his empire was built on unscrupulous tactics: grand-scale collusion with the railroads, predatory pricing, industrial espionage, and wholesale bribery of political officials. The titan spent more than thirty years dodging investigations until Teddy Roosevelt and his trustbusters embarked on a marathon crusade to bring Standard Oil to bay.
While providing abundant new evidence of Rockefeller's misdeeds, Chernow discards the stereotype of the cold-blooded monster to sketch an unforgettably human portrait of a quirky, eccentric original. A devout Baptist and temperance advocate, Rockefeller gave money more generously--his chosen philanthropies included the Rockefeller Foundation, the University of Chicago, and what is today Rockefeller University--than anyone before him. Titan presents a finely nuanced portrait of a fascinating, complex man, synthesizing his public and private lives and disclosing numerous family scandals, tragedies, and misfortunes that have never before come to light.
John D. Rockefeller's story captures a pivotal moment in American history, documenting the dramatic post-Civil War shift from small business to the rise of giant corporations that irrevocably transformed the nation. With cameos by Joseph Pulitzer, William Randolph Hearst, Jay Gould, William Vanderbilt, Ida Tarbell, Andrew Carnegie, Carl Jung, J. Pierpont Morgan, William James, Henry Clay Frick, Mark Twain, and Will Rogers, Titan turns Rockefeller's life into a vivid tapestry of American society in the late nineteenth and early twentieth centuries. It is Ron Chernow's signal triumph that he narrates this monumental saga with all the sweep, drama, and insight that this giant subject deserves.

Ron Chernow, whose previous books have taken on the Morgan and Warburg financial empires, now turns his attention to the patriarch of the Rockefeller dynasty. John D. was history's first recorded billionaire and one of the most controversial public figures in America at the turn of the 20th century. Standard Oil--which he always referred to as the result of financial "cooperation," never as a "cartel" or a "monopoly"--controlled at its peak nearly 90 percent of the United States oil industry. Rockefeller drew sharp criticism, as well as the attention of federal probes, for business practices like underpricing his competitors out of the market and bribing politicians to secure his dominant market share.

While Chernow amply catalogs Rockefeller's misdeeds, he also presents the tycoon's human side. Making use of voluminous business correspondence, as well as rare transcripts of interviews conducted when Rockefeller was in his late 70s and early 80s, Chernow is able to present his subject's perspective on his own past, re-creating a figure who has come down to us as cold and unfeeling as a shrewd, dryly humorous man who had no inner misgivings about reconciling his devout religious convictions with his fiscal acquisitiveness. The story of John D. Rockefeller Sr. is, in many ways, the story of America between the Civil War and the First World War, and Chernow has told that story in magnificently fascinating depth and style.

"It's a thrill to read a biography as good as this one! Ron Chernow's Titan is a triumph, a brilliant, riveting, and monumental portrait of a fascinating human being and his age."--Robert A. Caro