Items related to And the Sea Is Never Full: Memoirs, 1969- 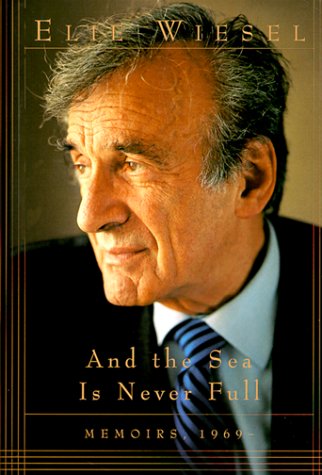 As this concluding volume of his moving and revealing memoirs begins, Elie Wiesel is forty years old, a writer of international repute. Determined to speak out more actively for both Holocaust survivors and the disenfranchised everywhere, he sets himself a challenge: "I will become militant. I will teach, share, bear witness. I will reveal and try to mitigate the victims' solitude." He makes words his weapon, and in these pages we relive with him his unstinting battles.

We see him meet with world leaders and travel to regions ruled by war, dictatorship, racism, and exclusion in order to engage the most pressing issues of the day. We see him in the Soviet Union defending persecuted Jews and dissidents; in South Africa battling apartheid and supporting Mandela's ascension; in Cambodia and in Bosnia, calling on the world to face the atrocities; in refugee camps in Albania and Macedonia as an emissary for President Clinton.

He chastises Ronald Reagan for his visit to the German military cemetery at Bitburg. He supports Lech Walesa but challenges some of his views. He confronts Francois Mitterrand over the misrepresentation of his activities in Vichy France. He does battle with Holocaust deniers. He joins tens of thousands of young Austrians demonstrating against renascent fascism in their country. He receives the Nobel Peace Prize.

Through it all, Wiesel remains deeply involved with his beloved Israel, its leaders and its people, and laments its internal conflicts. He recounts the behind-the-scenes events that led to the establishment of the Holocaust Museum in Washington, D.C. He shares the feelings evoked by his return to Auschwitz, by his recollections of Yitzhak Rabin, and by his memories of his own vanished family.

This is the magnificent finale of a historic memoir.

And the Sea Is Never Full is Elie Wiesel's memoir of the period between 1969 and the present. Wiesel, an esteemed writer (his Night is among the greatest memoirs of the Holocaust) and political activist, begins the book remembering a challenge given to himself at age 40: "I will become militant. I will teach, share, bear witness. I will reveal and try to mitigate the victims' solitude." He defends dissidents in the Soviet Union; draws attention to the atrocities of Cambodia and Bosnia; and fights apartheid in South Africa. He attacks Holocaust deniers, stands with Lech Walesa in Poland, visits Albania as a representative of President Clinton, and wins the Nobel Peace Prize. Wiesel's tragic boyhood compelled him to work very hard to love the world. He has learned to do so, and this memoir, like all of his best writing, teaches its reader to love the world while looking directly at its greatest terrors. --Michael Joseph Gross

In praise of Elie Wiesel's All Rivers Run to the Sea

"Part of the delight of All Rivers lies in witnessing the gradual transformation of the brokenhearted, orphaned young boy into the spirited journalist who longs to embrace the world at large, and who, in time, does." --Rebecca Goldstein, Newsday

"Immensely moving [and] unforgettable, [with] the searing intensity of his novels and autobiographical tales . . . Will make you cry, yet somehow leaves you renewed, with a cautious hope for humanity's future." --Publishers Weekly

"This is Elie Wiesel at his best, a highly revealing self-portrait of the man behind the world-famed persona." --Herman Wouk

"A biblical-like epic of a great man who has turned genocidal tragedy into a life force for world peace. It should be required reading." --Alan M. Dershowitz

"For all those who have never known Elie Wiesel, these memoirs are an introduction to the man, and for many who have met him, there will be discoveries and realizations." --Raul Hilberg, Boston Globe