Items related to The Warmth of Other Suns: The Epic Story of America's...

Wilkerson, Isabel The Warmth of Other Suns: The Epic Story of America's Great Migration 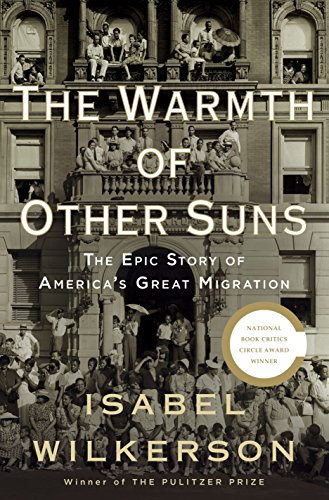 In this epic, beautifully written masterwork, Pulitzer Prize–winning author Isabel Wilkerson chronicles one of the great untold stories of American history: the decades-long migration of black citizens who fled the South for northern and western cities, in search of a better life. From 1915 to 1970, this exodus of almost six million people changed the face of America. Wilkerson compares this epic migration to the migrations of other peoples in history. She interviewed more than a thousand people, and gained access to new data and official records, to write this definitive and vividly dramatic account of how these American journeys unfolded, altering our cities, our country, and ourselves.

With stunning historical detail, Wilkerson tells this story through the lives of three unique individuals: Ida Mae Gladney, who in 1937 left sharecropping and prejudice in Mississippi for Chicago, where she achieved quiet blue-collar success and, in old age, voted for Barack Obama when he ran for an Illinois Senate seat; sharp and quick-tempered George Starling, who in 1945 fled Florida for Harlem, where he endangered his job fighting for civil rights, saw his family fall, and finally found peace in God; and Robert Foster, who left Louisiana in 1953 to pursue a medical career, the personal physician to Ray Charles as part of a glitteringly successful medical career, which allowed him to purchase a grand home where he often threw exuberant parties.

Wilkerson brilliantly captures their first treacherous and exhausting cross-country trips by car and train and their new lives in colonies that grew into ghettos, as well as how they changed these cities with southern food, faith, and culture and improved them with discipline, drive, and hard work. Both a riveting microcosm and a major assessment, The Warmth of Other Suns is a bold, remarkable, and riveting work, a superb account of an “unrecognized immigration” within our own land. Through the breadth of its narrative, the beauty of the writing, the depth of its research, and the fullness of the people and lives portrayed herein, this book is destined to become a classic.

Isabel Wilkerson won the 1994 Pulitzer Prize for Feature Writing for her reporting as Chicago bureau chief of The New York Times. The award made her the first black woman in the history of American journalism to win a Pulitzer Prize and the first African American to win for individual reporting. She won the George Polk Award for her coverage of the Midwest and a John Simon Guggenheim Fellowship for her research into the Great Migration. She has lectured on narrative writing at the Nieman Foundation at Harvard University and has served as Ferris Professor of Journalism at Princeton University and as the James M. Cox Jr. Professor of Journalism at Emory University. She is currently Professor of Journalism and Director of Narrative Nonfiction at Boston University. During the Great Migration, her parents journeyed from Georgia and southern Virginia to Washington, D.C., where she was born and reared. This is her first book.

In the Land of the Forefathers

Our mattresses were made

we got soup turtles

and from the woods

—Mahalia Jackson, Movin’ On Up
Leaving

This land is first and foremost

It was he who brought order

out of primeval wilderness . . .

Wherever one looks in this land,

whatever one sees that is the work of man,

was erected by the toiling

They fly from the land that bore them.

the night clouds were closing in on the salt licks east of the oxbow lakes along the folds in the earth beyond the Yalobusha River. The cotton was at last cleared from the field. Ida Mae tried now to get the children ready and to gather the clothes and quilts and somehow keep her mind off the churning within her. She had sold off the turkeys and doled out in secret the old stools, the wash pots, the tin tub, the bed pallets. Her husband was settling with Mr. Edd over the worth of a year’s labor, and she did not know what would come of it. None of them had been on a train before—not unless you counted the clattering local from Bacon Switch to Okolona, where, “by the time you sit down, you there,” as Ida Mae put it. None of them had been out of Mississippi. Or Chickasaw County, for that matter.

There was no explaining to little James and Velma the stuffed bags and chaos and all that was at stake or why they had to put on their shoes and not cry and bring undue attention from anyone who might happen to see them leaving. Things had to look normal, like any other time they might ride into town, which was rare enough to begin with.

Velma was six. She sat with her ankles crossed and three braids in her hair and did what she was told. James was too little to understand. He was three. He was upset at the commotion. Hold still now, James. Lemme put your shoes on, Ida Mae told him. James wriggled and kicked. He did not like shoes. He ran free in the field. What were these things? He did not like them on his feet. So Ida Mae let him go barefoot.

Miss Theenie stood watching. One by one, her children had left her and gone up north. Sam and Cleve to Ohio. Josie to Syracuse. Irene to Milwaukee. Now the man Miss Theenie had tried to keep Ida Mae from marrying in the first place was taking her away, too. Miss Theenie had no choice but to accept it and let Ida Mae and the grandchildren go for good. Miss Theenie drew them close to her, as she always did whenever anyone was leaving. She had them bow their heads. She whispered a prayer that her daughter and her daughter’s family be protected on the long journey ahead in the Jim Crow car.

“May the Lord be the first in the car,” she prayed, “and the last out.”

When the time had come, Ida Mae and little James and Velma and all that they could carry were loaded into a brother-in-law’s truck, and the three of them went to meet Ida Mae’s husband at the train depot in Okolona for the night ride out of the bottomland.

a man named roscoe colton gave Lil George Starling a ride in his pickup truck to the train station in Wildwood through the fruit-bearing scrubland of central Florida. And Schoolboy, as the toothless orange pickers mockingly called him, boarded the Silver Meteor pointing north.

A railing divided the stairs onto the train, one side of the railing for white passengers, the other for colored, so the soles of their shoes would not touch the same stair. He boarded on the colored side of the railing, a final reminder from the place of his birth of the absurdity of the world he was leaving.

He was getting out alive. So he didn’t let it bother him. “I got on the car where they told me to get on,” he said years later.

He hadn’t had time to bid farewell to everyone he wanted to. He stopped to say good-bye to Rachel Jackson, who owned a little café up on what they called the Avenue and the few others he could safely get to in the little time he had. He figured everybody in Egypt town, the colored section of Eustis, probably knew he was leaving before he had climbed onto the train, small as the town was and as much as people talked.

It was a clear afternoon in the middle of April. He folded his tall frame into the hard surface of the seat, his knees knocking against the seat back in front of him. He was packed into the Jim Crow car, where the railroad stored the luggage, when the train pulled away at last. He was on the run, and he wouldn’t rest easy until he was out of range of Lake County, beyond the reach of the grove owners whose invisible laws he had broken.

The train rumbled past the forest of citrus trees that he had climbed since he was a boy and that he had tried to wrestle some dignity out of and, for a time, had. They could have their trees. He wasn’t going to lose his life over them. He had come close enough as it was.

He had lived up to his family’s accidental surname. Starling. Distant cousin to the mockingbird. He had spoken up about what he had seen in the world he was born into, like the starling that sang Mozart’s own music back to him or the starling out of Shakespeare that tormented the king by speaking the name of Mortimer. Only, George was paying the price for tormenting the ruling class that owned the citrus groves. There was no place in the Jim Crow South for a colored starling like him.

He didn’t know what he would do once he got to New York or what his life would be. He didn’t know how long it would take before he could send for Inez. His wife was mad right now, but she’d get over it once he got her there. At least that’s what he told himself. He turned his face to the North and sat with his back to Florida.

Leaving as he did, he figured he would never set foot in Eustis again for as long as he lived. And as he settled in for the twenty-three-hour train ride up the coast of the Atlantic, he had no desire to have anything to do with the town he grew up in, the state of Florida, or the South as a whole, for that matter.

The Warmth of Other Suns: The Epic Story of Americas Great Migration

The Warmth of Other Suns: The Epic Story of Americas Great Migration

The Warmth of Other Suns: The Epic Story of America's Great Migration Hardcover

The Warmth of Other Suns: The Epic Story of America's Great Migration (Hardback or Cased Book)