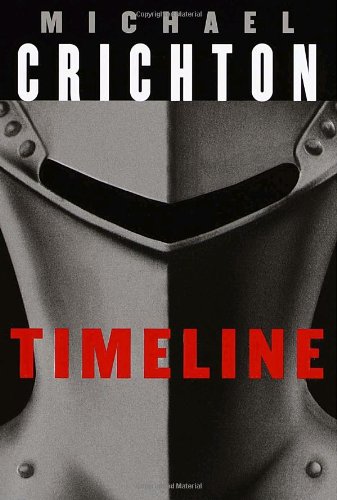 Michael Crichton's new novel opens on the threshold of the twenty-first century. It is a world of exploding advances on the frontiers of technology. Information moves instantly between two points, without wires or networks. Computers are built from single molecules. Any moment of the past can be actualized -- and a group of historians can enter, literally, life in fourteenth-century
feudal France.
Imagine the risks of such a journey.
Not since Jurassic Park has Michael Crichton given us such a magnificent adventure. Here, he combines a science of the future -- the emerging field of quantum technology -- with the complex realities of the medieval past. In a heart-stopping narrative, Timeline carries us into a realm of unexpected suspense and danger, overturning our most basic ideas of what is possible.

When you step into a time machine, fax yourself through a "quantum foam wormhole," and step out in feudal France circa 1357, be very, very afraid. If you aren't strapped back in precisely 37 hours after your visit begins, you'll miss the quantum bus back to 1999 and be stranded in a civil war, caught between crafty abbots, mad lords, and peasant bandits all eager to cut your throat. You'll also have to dodge catapults that hurl sizzling pitch over castle battlements. On the social front, you should avoid provoking "the butcher of Crecy" or Sir Oliver may lop your head off with a swoosh of his broadsword or cage and immerse you in "Milady's Bath," a brackish dungeon pit into which live rats are tossed now and then for prisoners to eat.

This is the plight of the heroes of Timeline, Michael Crichton's thriller. They're historians in 1999 employed by a tech billionaire-genius with more than a few of Bill Gates's most unlovable quirks. Like the entrepreneur in Crichton's Jurassic Park, Doniger plans a theme park featuring artifacts from a lost world revived via cutting-edge science. When the project's chief historian sends a distress call to 1999 from 1357, the boss man doesn't tell the younger historians the risks they'll face trying to save him. At first, the interplay between eras is clever, but Timeline swiftly becomes a swashbuckling old-fashioned adventure, with just a dash of science and time paradox in the mix. Most of the cool facts are about the Middle Ages, and Crichton marvelously brings the past to life without ever letting the pulse-pounding action slow down. At one point, a time-tripper tries to enter the Chapel of Green Death. Unfortunately, its custodian, a crazed giant with terrible teeth and a bad case of lice, soon has her head on a block. "She saw a shadow move across the grass as he raised his ax into the air." I dare you not to turn the page!

Through the narrative can be glimpsed the glowing bones of the movie that may be made from Timeline and the cutting-edge computer game that should hit the market in 2000. Expect many clashing swords and chase scenes through secret castle passages. But the book stands alone, tall and scary as a knight in armor shining with blood. --Tim Appelo

“THE PRESENT AND THE LONG-AGO PAST COLLIDE. . . . [as] three young historians whisk themselves back to fourteenth-century feudal France to rescue a friend–and engulf themselves in all manner of mind-blowing intrigue.”
–Chicago Sun-Times

Shipping: US$ 12.33
From United Kingdom to U.S.A.
Destination, rates & speeds

Book Description Hardcover. Condition: New. Michael Crichton`s new novel opens on the threshold of the twenty-first century. It is a world of exploding advances on the frontiers of technology. Information moves instantly between two points, without wires or networks. Computers are built from singl. Seller Inventory # OM-BK-2020-06-08-4

Book Description Deckle Edge Hardcover. Condition: New. Slight shelf wear on cover, otherwise new. Quality Books. Because We Care - Shipped from Canada. Usually ships within 1-2 business days. If you buy this book from us, we will donate a book to a local school. We donate 10,000+ books to local schools every year. Seller Inventory # R02950A