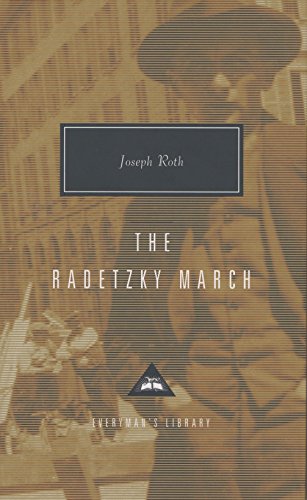 By one of the most distinguished Austrian writers of our century, a portrait of three generations set against the panoramic background of the declining Austro-Hungarian Empire. Translated by a three-time winner of the PEN Translation Prize.

Joseph Roth's 1932 novel, The Radetzky March, starts with an accident that creates a dynasty. When an infantry lieutenant steps in front of a bullet intended for the young Franz Joseph, the Austro-Hungarian emperor rewards him with wealth, promotion, and a knighthood. Almost overnight, Joseph Trotta is "severed" from his ancestors, and his family is transformed from unremarkable soldiers and peasants living in the outer reaches of the empire to barons and high-ranking officials living near the imperial palace. As long as Franz Joseph is the Kaiser, their status is secure. But when Trotta happens upon a schoolbook account of the event that exaggerates his heroism, he is shaken:

He had been driven from the paradise of simple faith in Emperor and Virtue, Truth, and Justice, and, now fettered in silence and endurance, he may have realized that the stability of the world, the power of laws, and the glory of majesties were all based on deviousness.

As World War I approaches and the monarchy's limitations become apparent, Trotta's son and grandson become even further removed from this paradise. They continue to follow the codes of honor and duty, though such behavioral guides become pointless, even burdensome, in a world shorn of simple faith in an emperor. Trotta's grandson Carl Joseph finds his military career overwhelmed by bad horsemanship, alcohol dependency, frivolous roulette and baccarat debts, and misguided love affairs--the kinds of flaws, he thinks, that are inevitable without the self-assurance and practical knowledge that he would have gained had he earned (rather than inherited) his position. Not long ago, he thinks wistfully, his family lived as peasants "in dwarfed huts, making their wives fertile by night and their fields by day." It is here that the Trottas' demise is at its most poignant, as the focus of the narrative shifts from the loss of status to the far more devastating loss of purpose.

In both style and temperament, Roth's novel stands between the 19th and 20th centuries, and the three Trottas could be seen as part of a progression that stretches back to Tolstoy's Prince Andrei and looks ahead to the Mathieu of Sartre's Les Chemins de la Liberté trilogy. Although The Radetzky March illustrates why the monarchy was doomed, and isn't blind to the new nations and ideologies on the horizon, Roth is more interested in his characters' psychology than their politics. And their central difficulty--the bewildering meaninglessness that follows the dissolution of an ideal--has been a fundamental 20th-century dilemma. The Trottas are, in Roth's stunning phrase, "homesick for the Kaiser." One need only substitute "the Chairman" or "Marxism" or "God" to understand the novel's lasting resonance. --John Ponyicsanyi

"A masterpiece.... The totality of Joseph Roth's work is no less than a tragédie humaine achieved in the techniques of modern fiction. No other contemporary writer, not excepting Thomas Mann, has come so close to achieving the wholeness--lying atop a slippery pole we never stop trying to climb--that Lukács cites as our impossible aim." --Nadine Gordimer

The Radetzky March, first published in 1932, is Joseph Roth's greatest literary achievement, a novel of world literary rank. Spanning three generations of the Trotta family and set in the waning days of the Hapsburg Empire, the novel unfolds with marvelous subtlety to reveal its splendidly modern ironies. In this new translation, Joachim Neugroschel captures the uniquely Rothian tone of the original--profound and elegant seriousness meshed with a tender sense of irony. One of the greatest novels of the twentieth century and an essential novel for our time, The Radetzky March is still breathtaking and still brilliant.

Joseph Roth was born in 1894, in a small Galician town on the eastern border of the Hapsburg Empire. He served briefly in the Austro-Hungarian Army and later worked as a journalist in Vienna, Berlin and Frankfurt. In 1933, he moved to Paris, where, upset by events in Europe and by his personal problems, he drank excessively, dying in Paris in 1939 from pneumonia and heart failure brought on by the withdrawal symptoms during a delerium tremens spell. One of the central figures in the émigré intellectual opposition to the Nazis, Joseph Roth is the author of fifteen novels and novellas and a large body of journalism. He is, along with Robert Musil and Thomas Mann, among the greatest of the early twentieth century Central European writers.

Book Description Hardback. Condition: New. Reissue. Language: English. Brand new Book. By one of the most distinguished Austrian writers of our century, a portrait of three generations set against the panoramic background of the declining Austro-Hungarian Empire. Translated by a three-time winner of the PEN Translation Prize. Seller Inventory # BZE9780679451006