Items related to Still Me 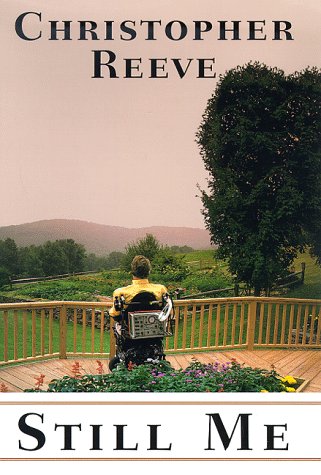 When the first Superman movie came out I was frequently asked 'What is a hero?'  I remember the glib response I repeated so many times.  My answer was that a hero is someone who commits a courageous action without considering the consequences--a soldier who crawls out of a foxhole to drag an injured buddy to safety.  And I also meant individuals who are slightly larger than life: Houdini and Lindbergh, John Wayne, JFK, and Joe DiMaggio.  Now my definition is completely different.  I think a hero is an ordinary individual who finds strength to persevere and endure in spite of overwhelming obstacles: a fifteen-year-old boy who landed on his head while wrestling with his brother, leaving him barely able to swallow or speak; Travis Roy, paralyzed in the first thirty seconds of a hockey game in his freshman year at college.  These are real heroes, and so are the families and friends who have stood by them."

The whole world held its breath when Christopher Reeve struggled for life on Memorial Day, 1995.  On the third jump of a riding competition, Reeve was thrown headfirst from his horse in an accident that broke his neck and left him unable to move or breathe.

In the years since then, Reeve has not only survived, but has fought for himself, for his family, and for the hundreds of thousands of people with spinal cord injuries in the United States and around the world.  And he has written Still Me, the heartbreaking, funny, courageous, and hopeful story of his life.

Chris describes his early success on Broadway opposite the legendary Katherine Hepburn, the adventure of filming Superman on the streets of New York, and how the movie made him a star.  He continued to move regularly between film acting and theater work in New York, Los Angeles, and at the WIlliamstown Theatre Festival in the Berkshires.  Reunited with his Bostonians director, James Ivory, in 1992, he traveled to England to work with Emma Thompson and Anthony Hopkins in The Remains of the Day.

The Man who cannot move has not stopped moving.  He has established a charitable foundation to raise awareness and money for research on spinal cord injuries.  His work as director of the HBO film In the Gloaming earned him an Emmy nomination, one of five that the film received.  His speeches at the Democratic National Convention and the Academy Awards inspired people around the country and the world.  He has testified before Congress on behalf of health insurance legislation, lobbied for increased federal funding for spinal cord research, and developed a working relationship with President Clinton.

With dignity and sensitivity, he describes the journey he has made--physically, emotionally, spiritually.  He explores his complex relationship with his parents, his efforts to remain a devoted husband and father, and his continuing and heroic battle to rebuild his life.

This is the determined, passionate story of one man, a gifted actor and star, and how he and his family came to grips with the kind of devastating, unexplainable shock that fate can bring to any of us.  Chris and Dana Reeve have gathered the will and the spirit to create a new life, one responsive and engaged and focused on the future.

Review:
Christopher Reeve has beaten the odds before. He scored his first role in a Euripides play at 15, costarred with Katharine Hepburn at 22, and was one of two advanced-program students accepted at Juilliard, to which 2,000 drama students annually apply. (The other advanced student became his best friend, Robin Williams.) Reeve rode a sailplane to 32,000 feet over Pikes Peak, fell 90 feet from a parasail harness into four feet of water and walked away. He survived emergency appendectomy, malaria in Kenya, and the disastrous film Changing Channels, with Burt Reynolds. He flew vintage airplanes upside down. On his first solo transatlantic flight, a radar controller informed him he was about to run out of gas 200 miles west of Iceland. The radar controller had misread his screen, and Reeve landed safely.

Then, in 1995, his horse balked at a 3-foot-3-inch racecourse fence, made an abrupt "dirty stop," Reeve's hands got tangled in the reins, he landed on his head and got a "hangman's injury"--a broken neck. Ace paramedics got oxygen to him 60 seconds before brain damage set in, and a helicopter named Pegasus lofted him to a hospital.

Reeve was already important. His interpretation of Superman was classic, and his starring role in The Bostonians launched the Merchant/Ivory school of filmmaking. But it was not until his paralysis that Reeve really got moving as a public figure of the first rank. As his memoir Still Me details, since the accident, Reeve has directed his first film, started the Christopher Reeve Foundation to fund spinal-cord-repair research, lobbied Congress, and crisscrossed the country on speaking engagements.

Says Reeve, "Lindbergh made it across the Atlantic [where he was feted by Reeve's grandma]; Houdini got out of those straitjackets; with enough money and grass-roots support, why shouldn't I be able to get out of this wheelchair?" Part Hollywood reminiscence, part scientific detective story, and part soapbox speech, Still Me explains the tantalizing but quite real possiblity that Reeve (and a quarter-million other paralyzed people, plus 49 million disabled Americans) may get back on their feet. Bobby Kennedy once tried to bolster Reeve's faith by saying, "Just fake it till you make it. The prayers will seem phony, but one day they'll become real." Christopher Reeve has more than a prayer, he has a program. He ain't fake, and he just might make it, leading a cast of millions. --Tim Appelo

From the Publisher:
Read what our listeners are saying . . .


Four years, almost to the month, after Christopher Reeve brought unwanted world-wide attention to himself and to the tiny, little known, town of Culpepper, Virginia, by falling from his horse in a jumping competition, a Random House Audio production team sat with him at his house as he read his new book Still Me for all to hear.

Anyone who witnessed Reeve's first public appearances after the accident will recall the tremendous effort it took for him to speak, even a few words, as the respirator pumped air in and out of his lungs. They will find it hard to believe that he could present a warm and compelling and beautifully modulated reading and sustain it for three hours of finished product. His is an extraordinary story of personal courage, determination and passion, told with charm and humor and hope.

Despite the fact that he crushed two vertebrae high on his spinal column and is paralyzed from the neck down, Reeve determined that, one day, he would walk again. Listening to this heartwarming story of his childhood, his education, including a stint studying under the famed John Houseman at Julliard, his friendship with Robin Williams, Katherine Hepburn and others and his marriage to the remarkable Dana, Reeve leaves little doubt that he will succeed. This is a good book under most any definition. You
won't want to miss it. [Sorry, it is abridged only].