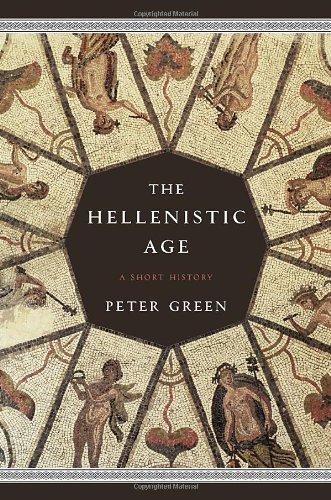 The Hellenistic era witnessed the overlap of antiquity’s two great Western civilizations, the Greek and the Roman. This was the epoch of Alexander’s vast expansion of the Greco-Macedonian world, the rise and fall of his successors’ major dynasties in Egypt and Asia, and, ultimately, the establishment of Rome as the first Mediterranean superpower.

The Hellenistic Age chronicles the years 336 to 30 BCE, from the days of Philip and Alexander of Macedon to the death of Cleopatra and the final triumph of Caesar’s heir, the young Augustus. Peter Green’s remarkably far-ranging study covers the prevalent themes and events of those centuries: the Hellenization of an immense swath of the known world–from Egypt to India–by Alexander’s conquests; the lengthy and chaotic partition of this empire by rival Macedonian marshals after Alexander’s death; the decline of the polis (city state) as the predominant political institution; and, finally, Rome’s moment of transition from republican to imperial rule.

Predictably, this is a story of war and power-politics, and of the developing fortunes of art, science, and statecraft in the areas where Alexander’s coming disseminated Hellenic culture. It is a rich narrative tapestry of warlords, libertines, philosophers, courtesans and courtiers, dramatists, historians, scientists, merchants, mercenaries, and provocateurs of every stripe, spun by an accomplished classicist with an uncanny knack for infusing life into the distant past, and applying fresh insights that make ancient history seem alarmingly relevant to our own times.

To consider the three centuries prior to the dawn of the common era in a single short volume demands a scholar with a great command of both subject and narrative line. The Hellenistic Age is that rare book that manages to coalesce a broad spectrum of events, persons, and themes into one brief, indispensable, and amazingly accessible survey.

Peter Green is the James R. Dougherty, Jr., Centennial Professor of Classics Emeritus at the University of Texas at Austin. He is the author of several books on the ancient world, including Alexander of Macedon, The Greco-Persian Wars, and Alexander to Actium. Currently he serves as adjunct professor of classics at the University of Iowa and editor of Syllecta Classica.

In October 336 BCE, a much-publicized royal wedding took place in the ancient Macedonian city of Aegae (modern Vergina): King Philip II’s daughter Cleopatra was marrying Alexander, king of the neighboring state of Epirus. The occasion was peculiar and ended tragically. The bridegroom, to begin with, was the bride’s uncle—in fact, the brother of Philip’s powerful but repudiated wife, Olympias, till recently an exile in Epirus, plotting revengeful mischief, but now back in Aegae as mother of the bride. Being on the eve of launching a major invasion of Asia Minor, then a Persian satrapy, Philip characteristically figured that an incestuous dynastic alliance would be a cheaper and easier way of protecting his rear than a time- consuming campaign. Hence the wedding. During the ceremony, the images of the twelve Olympian gods were accompanied, in procession, by one of Philip himself. Thus when, on the second day of the festivities, Philip was assassinated by a member of his own bodyguard as he entered the theater prior to the games, many regarded this as divine punishment for unseemly royal hubris.

For others, clearly, it was an opportunity not to be missed. The assassin, Pausanias, was pursued and killed—thus precluding any interrogation of him—by friends of Philip’s son and (recently dispossessed) heir, the better-known, but not yet Great, Alexander. One of Philip’s most trusted senior nobles, Antipater, took immediate charge, quelled the chaos, presented young Alexander to the Macedonian army assembly, and had him confirmed as successor to the throne before his father’s body was cold. From being, at unlikely best, regent in Macedonia while Philip was winning glory on campaign, Alexander now found himself, at one stroke, both king and prospective leader of the long-planned Persian invasion. Regicide, as Elizabeth Carney reminds us, “was something of a Macedonian tradition.”

Until the late fall of 338, the year of Philip’s great victory over the Greek states at Chaeronea, Alexander remained, as he had been since adolescence, Philip’s crown prince and designated successor. In 340, when only sixteen, he had acted as regent while his father was campaigning. He led the successful cavalry charge at Chaeronea, a feat that won him a public acclamation by the army. He and his mother, Olympias, were both included among the family images—of gold and ivory, hitherto reserved for divine portraiture—in the curious circular edifice that Philip dedicated at Olympia to celebrate his victory. Alexander was also one of the delegates to escort the ashes of the Athenian dead back to Athens (the only time, surprisingly, that he ever went there).

This was the last official duty he carried out during Philip’s lifetime. In the late fall of 338, Philip abruptly repudiated Olympias, cast doubts on Alexander’s legitimacy, and announced his intention of marrying a young Macedonian, Cleopatra. Not only was Cleopatra impeccably blue-blooded and ethnic—in contrast with Olympias the Epirot—but her uncle Attalus, a successful and popular soldier, was married to the daughter of Parmenio, Philip’s most trusted general. With Parmenio, he was to command the force securing an advance bridgehead in Asia Minor. Philip’s formation of a safe power bloc united by marriage surely bore some relation to the coming campaign. Yet to disinherit, and mortally alienate, the successor he had groomed for almost twenty years—and to do so almost immediately before his planned crossing into Asia—was the kind of gaffe that Philip, always a canny diplomat, would in the normal course of events never commit. These events, clearly, were anything but normal.

What, then, were his underlying motives? The wedding feast simply underlined their apparent lunacy. Everyone got drunk. Attalus proposed a toast, a prayer for Philip and Cleopatra to produce a legitimate heir. Alexander, in understandable fury—“Are you calling us [note the royal “we”] a bastard?”—assaulted Attalus. Philip made to attack, not Attalus, but his own son. Drunk, he stumbled and collapsed on the floor, giving Alexander a famous exit line: “That’s the man who’s going to cross from Europe to Asia, and he can’t even make it from one couch to the next!” The insulted prince, heir- apparent no longer, got his mother away to Epirus and himself took refuge among the Illyrians. Both, predictably, proceeded to stir up frontier trouble.

Why, with a major campaign ahead of him, should so canny a diplomat as Philip have invited palace mayhem by trashing the long-established royal succession overnight? If we assume that he had not taken leave of his senses but was acting on a rational basis, there is one motive only that could explain his sudden volte-face in the fall of 338: the conviction that Alexander and Olympias were planning his overthrow. Argead history made such a fear look all too plausible. If this was what Philip believed, his actions make good sense: in hindsight, of course, they can be seen as not ruthless enough.

Was his belief justified? On this, certainty is impossible. But it is not hard to see how such suspicions could have been aroused: Alexander’s entire upbringing, especially when assessed in light of his mother’s

inordinate ambitions for him, suggests a pattern of high aims, even higher hubris, and dangerous royal impatience. The boy was encouraged to think of himself as a new Achilles (from whom his mother’s family claimed descent). His Homeric ideal was to be “a good king and a strong spear-fighter” and, perhaps more important, “ever to strive to be best, and outstanding above all others” (Hom. Il. 3.179, 6.208). Glory and fame, kleos, were to be won by conquest. But Philip, again and again, seemed to be anticipating him. “For me,” Alexander told his tight-knit circle of friends, “he will leave no great or brilliant achievement to be displayed to the world with your aid. . . . What use are possessions to me if I achieve nothing?” (Plut. Mor. 179D 1; Alex. 5.2). Worst of all, it was now Philip, not he, who stood ready to invade Asia. The great venture that Alexander had thought of as his own inheritance ever since childhood seemed, like Achilles’ prize, about to elude him. If he and his mother were in fact planning a coup, now was the time, and his motivation could hardly have been stronger.

So, literally at the eleventh hour, Alexander of Macedon—now King Alexander III—came into the full inheritance of which he and his mother had dreamed for so long. Like his father, he assumed power in dangerous circumstances: a baptism of fire. He was young, relatively unknown, and not yet haloed with that extraordinary aura of charisma and achievement that in a few short years would come to define him. His powerful opponents may well have thought they could dispose of this upstart boy without trouble. They were wrong: he showed himself absolutely ruthless from the start and had good reason to be. He knew that both his cousin Amyntas, and Cleopatra’s newborn son, Caranus (named, ostentatiously, after the dynasty’s mythical founder), represented a direct threat to his rule and had powerful backers.

Outside Macedonia, too, the situation was volatile. The Thebans expelled their Macedonian garrison. There was trouble in Thrace and the Peloponnese. From Athens, Demosthenes wrote to Parmenio and Attalus in Asia Minor, urging them to rebel, promising Athenian help, and sneering at the new Macedonian king as a mere brainless adolescent. Attalus certainly, and Parmenio very probably, took the bait. Alexander’s new kingdom was “exposed to great jealousies, dire hatreds, and dangers on every side” (Plut. Alex. 11.1). His older advisers, led by Antipater, were all understandably advising him to use caution: to steer clear of tangling with the southern Greek states, to appease the frontier tribes with concessions. No, he told them: if I abate my resolve one iota, all our enemies will be on us at once. The only guarantee of security is courage and daring.

This, of course (a point he probably felt it preferable not to mention), included at least one assassination mission. Attalus, with or without the support of Athens, was an obvious danger (besides having mortally insulted Alexander), and Alexander had already sent a trusted friend to army headquarters in Asia Minor, officially as a liaison officer but with secret instructions to bring Attalus back alive if possible, otherwise to kill him at the first convenient opportunity and make a deal with Parmenio. Parmenio sized up the young king’s record so far, decided to switch sides, and even cooperated over the murder of Attalus, his own son-in-law. But he exacted a stiff price for his support. When Alexander’s task force crossed into Asia in the spring of 334, Parmenio was his immediate deputy, and almost every crucial senior command was held by one of his friends or relatives. Not for over five years, and then only by a show trial and assassination, was this stranglehold finally broken.

Having thus summarily dealt with his domestic problems and given the Greek states a taste of what they were up against, Alexander called a meeting of the Hellenic League at Corinth, where the terms laid down by Philip after his victory at Chaeronea were all reconfirmed in the name of his son. Alexander was elected hegemon in his father’s place and captain-general, “with unlimited powers,” of the forthcoming invasion of Asia, to exact vengeance (so ran the declaration) for Xerxes’ sacrilegious destruction of Greek temples a century and a half before. The alliance with Macedonia “in perpetuity” was renewed. The Greek states—a little diplomatic irony never came amiss—were to be “free and independent.̶...