Items related to The Names 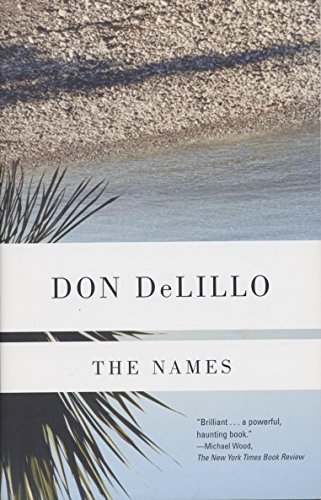 Set against the backdrop of a lush and exotic Greece, The Names is considered the book which began to drive "sharply upward the size of his readership" (Los Angeles Times Book Review). Among the cast of DeLillo's bizarre yet fully realized characters in The Names are Kathryn, the narrator's estranged wife; their son, the six-year-old novelist; Owen, the scientist; and the neurotic narrator obsessed with his own neuroses. A thriller, a mystery, and still a moving examination of family, loss, and the amorphous and magical potential of language itself, The Names stands with any of DeLillo's more recent and highly acclaimed works.

"The Names not only accurately reflects a portion of our contemporary world but, more importantly, creates an original world of its own."--Chicago Sun-Times

"DeLillo sifts experience through simultaneous grids of science and poetry, analysis and clear sight, to make a high-wire prose that is voluptuously stark."--Village Voice Literary Supplement

Don DeLillo is the author of fifteen novels, including Zero K, Underworld, Falling Man, White Noise, and Libra. He has won the National Book Award, the PEN/Faulkner Award for Fiction, the Jerusalem Prize for his complete body of work, and the William Dean Howells Medal from the American Academy of Arts and Letters. In 2010, he was awarded the PEN/Saul Bellow Prize. The Angel Esmeralda was a finalist for the 2011 Story Prize and the PEN/Faulkner Award for Fiction. In 2012, DeLillo received the Carl Sandburg Literary Award for his body of work.

The Names (Paperback or Softback)