Items related to Maus II: A Survivor's Tale: And Here My Troubles... 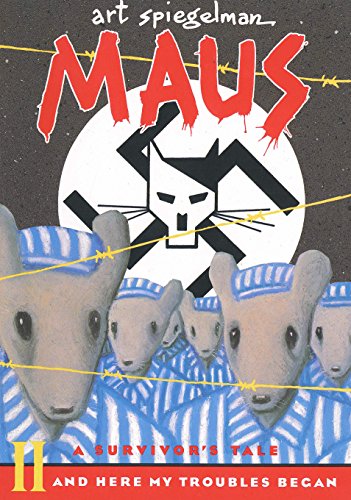 The second installment of the Pulitzer Prize-winning graphic novel acclaimed as “the most affecting and successful narrative ever done about the Holocaust” (Wall Street Journal) and “the first masterpiece in comic book history” (The New Yorker).

A brutally moving work of art—widely hailed as the greatest graphic novel ever written—Maus recounts the chilling experiences of the author’s father during the Holocaust, with Jews drawn as wide-eyed mice and Nazis as menacing cats.

Maus is a haunting tale within a tale, weaving the author’s account of his tortured relationship with his aging father into an astonishing retelling of one of history's most unspeakable tragedies. It is an unforgettable story of survival and a disarming look at the legacy of trauma.

"Maus is a book that cannot be put down, truly, even to sleep. When two of the mice speak of love, you are moved, when they suffer, you weep. Slowly through this little tale comprised of suffering, humor and life's daily trials, you are captivated by the language of an old Eastern European family, and drawn into the gentle and mesmerizing rhythm, and when you finish Maus, you are unhappy to have left that magical world."--Umberto Eco

MAUS was the first half of the tale of survival of the author's parents, charting their desperate progress from prewar Poland Auschwitz. Here is the continuation, in which the father survives the camp and is at last reunited with his wife.