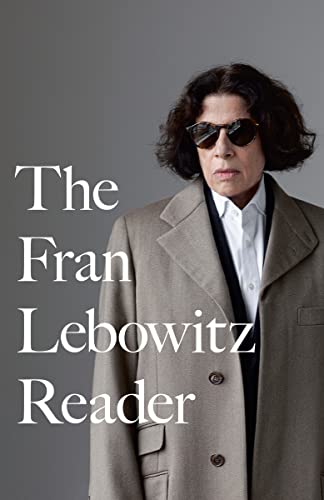 The Fran Lebowitz Reader brings together in one volume, with a new preface, two bestsellers, Metropolitan Life and Social Studies, by an "important humorist in the classic tradition" (The New York Times Book Review) who is "the natural successor to Dorothy Parker" (British Vogue). In "elegant, finely honed prose" (The Washington Post Book World), Lebowitz limns the vicissitudes of contemporary urban life—its fads, trends, crazes, morals, and fashions. By turns ironic, facetious, deadpan, sarcastic, wry, wisecracking, and waggish, she is always wickedly entertaining.

They say that age brings wisdom--or resignedness, at least--but every time you see Fran Leibowitz, she's just as hangdog as ever. Hey, Fran, how about writing a few more humor columns? That'll cheer you up! Or maybe not, but until she writes more columns, we'll have to make do with The Fran Leibowitz Reader. This paperback collects her two bestsellers of the 1970s into one volume, Metropolitan Life and Social Studies. Back then, her books defined knowing, urban cool. Guess what? They still do. If you were a mite too young to appreciate Leibowitz's take on that libertine decade the first time around ("Notes on Trick," anyone?), now is an excellent time to make her acquaintance. The pieces still hold up as good writing and deliver plenty of sharp laughs. Would that we had her jaundiced take on the '90s, which could use some Leibowitz-style deflating. Come back, Fran! Come back!

Fran Lebowitz still lives in New York City, as she does not believe that she would be allowed to live anywhere else.