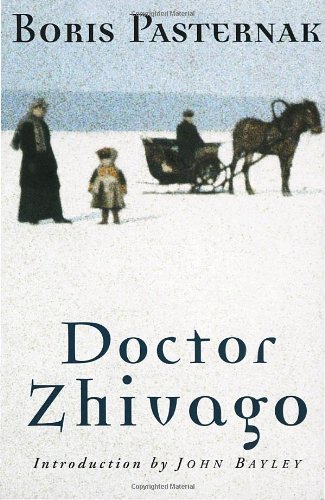 n celebration of the 40th anniversary of its original publication, here is the only paperback edition now available of the classic story of the life and loves of a poet/physician during the turmoil of the Russian Revolution.

BORIS Leonidovich PASTERNAK won the Nobel Prize in Literature in 1958 "for his important achievement both in contemporary lyrical poetry and in the field of the great Russian epic tradition.” — the Nobel Prize committee. Pasternak had to decline the honor because of the protests in his home country. Doctor Zhivago became an international bestseller and was translated into 18 languages but circulated only in secrecy and translation in Russia. In 1987 the Union of Soviet Writers posthumously reinstated Pasternak, a move that gave his works a legitimacy they had lacked in the Soviet Union since his expulsion from the writers' union in 1958 and that finally made possible the publication of Doctor Zhivago in the Soviet Union. Pasternak's son accepted his father's Nobel Prize medal at a ceremony in Stockholm in 1989.

They walked and walked and sang "Memory Eternal,"1 and when they stopped, it seemed that the song went on being repeated by their feet, the horses, the gusts of wind.

Passers-by made way for the cortčge, counted the wreaths, crossed themselves.  The curious joined the procession, asked:  "Who's being buried?"  "Zhivago," came the answer.  "So that's it.  Now I see."  "Not him.  Her."  "It's all the same.  God rest her soul.  A rich funeral."

The last minutes flashed by, numbered, irrevocable.  "The earth is the Lord's and the fullness thereof; the world, and those that dwell therein."  The priest, tracing a cross, threw a handful of earth onto Marya Nikolaevna.  They sang "With the souls of the righteous."  A terrible bustle began.  The coffin was closed, nailed shut, lowered in.  A rain of clods drummed down as four shovels hastily filled the grave.  Over it a small mound rose.  A ten-year-old boy climbed onto it.

Only in the state of torpor and insensibility that usually comes at the end of a big funeral could it have seemed that the boy wanted to speak over his mother's grave.

He raised his head and looked around from that height at the autumn wastes and the domes of the monastery with an absent gaze.  His snub-nosed face became distorted.  His neck stretched out.  If a wolf cub had raised his head with such a movement, it would have been clear that he was about to howl.  Covering his face with his hands, the boy burst into sobs.  A cloud flying towards him began to lash his hands and face with the wet whips of a cold downpour.  A man in black, with narrow, tight-fitting, gathered sleeves, approached the grave.  This was the deceased woman's brother and the weeping boy's uncle, Nikolai Nikolaevich Vedenyapin, a priest defrocked at his own request.  He went up to the boy and led him out of the cemetery.

They spent the night in one of the monastery guest rooms, allotted to the uncle as an old acquaintance.  It was the eve of the Protection.2  The next day he and his uncle were to go far to the south, to one of the provincial capitals on the Volga, where Father Nikolai worked for a publisher who brought out a local progressive newspaper.  The train tickets had been bought, the luggage was tied up and standing in the cell.  From the nearby station the wind carried the plaintive whistling of engines maneuvering in the distance.

Towards evening it turned very cold.  The two ground-floor windows gave onto the corner of an unsightly kitchen garden surrounded by yellow acacia bushes, onto the frozen puddles of the road going past, and onto the end of the cemetery where Marya Nikolaevna had been buried that afternoon.  The kitchen garden was empty, except for a few moiré patches of cabbage, blue from the cold.  When the wind gusted, the leafless acacia bushes thrashed about as if possessed and flattened themselves to the road.

During the night Yura was awakened by a tapping at the window.  The dark cell was supernaturally lit up by a fluttering white light.  In just his nightshirt, Yura ran to the window and pressed his face to the cold glass.

Beyond the window there was no road, no cemetery, no kitchen garden.  A blizzard was raging outside, the air was smoky with snow.  One might have thought the storm noticed Yura and, knowing how frightening it was, reveled in the impression it made on him.  It whistled and howled and tried in every way possible to attract Yura's attention.  From the sky endless skeins of white cloth, turn after turn, fell on the earth, covering it in a winding sheet.   The blizzard was alone in the world, nothing rivalled it.

Yura's first impulse, when he got down from the windowsill, was to get dressed and run outside to start doing something.  He was afraid now that the monastery cabbage would be buried and never dug out, now that mama would be snowed under and would be helpless to resist going still deeper and further away from him into the ground.

Again it ended in tears.  His uncle woke up, spoke to him of Christ and comforted him, then yawned, went to the window, and fell to thinking.  They began to dress.  It was getting light.

While his mother was alive, Yura did not know that his father had abandoned them long ago, had gone around various towns in Siberia and abroad, carousing and debauching, and that he had long ago squandered and thrown to the winds the millions of their fortune.  Yura was always told that he was in Petersburg or at some fair, most often the one in Irbit.

But then his mother, who had always been sickly, turned out to have consumption.  She began going for treatment to the south of France or to northern Italy, where Yura twice accompanied her.  Thus, in disorder and amidst perpetual riddles, Yura spent his childhood, often in the hands of strangers, who changed all the time.  He became used to these changes, and in such eternally incoherent circumstances his father's absence did not surprise him.

As a little boy, he had still caught that time when the name he bore was applied to a host of different things.  There was the Zhivago factory, the Zhivago bank, the Zhivago buildings, a way of tying and pinning a necktie with a Zhivago tie-pin, and even some sweet, round-shaped cake, a sort of baba au rhum, called a Zhivago, and at one time in Moscow you could shout to a cabby:  "To Zhivago!" just like "To the devil's backyard!" and he would carry you off in his sleigh to a fairy-tale kingdom.  A quiet park surrounded you.  Crows landed on the hanging fir branches, shaking down hoarfrost.  Their cawing carried, loud as the crack of a tree limb.  From the new buildings beyond the clearing, pure-bred dogs came running across the road.  Lights were lit there.  Evening was falling.

Suddenly it all flew to pieces.  They were poor.

In the summer of 1903, Yura and his uncle were riding in a tarantass and pair over the fields to Duplyanka, the estate of Kologrivov, the silk manufacturer and great patron of the arts, to see Ivan Ivanovich Voskoboinikov, a pedagogue and popularizer of useful knowledge.

It was the feast of the Kazan Mother of God,3 the thick of the wheat harvest.  Either because it was lunchtime or on account of the feast day, there was not a soul in the fields.  The sun scorched the partly reaped strips like the half-shaven napes of prisoners.  Birds circled over the fields.  Its ears drooping, the wheat drew itself up straight in the total stillness or stood in shocks far off the road, where, if you stared long enough, it acquired the look of moving figures, as if land surveyors were walking along the edge of the horizon and taking notes.

"And these," Nikolai Nikolaevich asked Pavel, a handyman and watchman at the publishing house, who was sitting sideways on the box, stooping and crossing his legs, as a sign that he was not a regular coachman and driving was not his calling, "are these the landowner's or the peasants'?"

"Them's the master's," Pavel replied, lighting up, "and them there," having lighted up and inhaled, he jabbed with the butt of the whip handle towards the other side and said after a long pause, "them there's ours.  Gone to sleep, eh?" he scolded the horses every so often, glancing at their tails and rumps out of the corner of his eye, like an engineer watching a pressure gauge.

But the horses pulled like all horses in the world; that is, the shaft horse ran with the innate directness of an artless nature, while the outrunner seemed to the uncomprehending to be an arrant idler, who only knew how to arch its neck like a swan and do a squatting dance to the jingling of the harness bells, which its own leaps set going.

Nikolai Nikolaevich was bringing Voskoboinikov the proofs of his little book on the land question, which, in view of increased pressure from the censorship, the publisher had asked him to revise.

"Folk are acting up in the district," said Nikolai Nikolaevich.  "In the Pankovo area they cut a merchant's throat and a zemstvo man4 had his stud burned down.  What do you think of that?  What are they saying in your village?"

But it turned out that Pavel took an even darker view of things than the censor who was restraining Voskoboinikov's agrarian passions.

"What're they saying?  Folk got free and easy.  Spoiled, they say.  Can you do that with our kind?  Give our muzhiks the head, they'll crush each other, it's God's truth.  Gone to sleep, eh?"

This was the uncle and nephew's second trip to Duplyanka. Yura thought he remembered the way, and each time the fields spread out wide, with woods embracing them in front and behind in a narrow border, it seemed to Yura that he recognized the place where the road should turn right, and at the turn there would appear and after a moment vanish the seven-mile panorama of Kologrivovo, with the river glistening in the distance and the railroad running beyond it.  But he kept being mistaken.  Fields were succeeded by fields.  Again and again they were embraced by woods.  The succession of these open spaces was tuned to a vast scale.  You wanted to dream and think about the future.

Not one of the books that were later to make Nikolai Nikolaevich famous had yet been written.  But his thoughts were already defined.  He did not know how near his hour was.

Soon he was to appear among the representatives of the lit...