Items related to Think of England 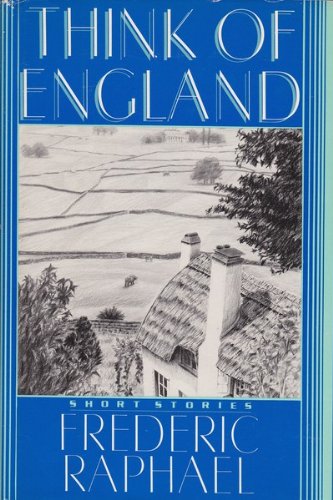 With settings ranging from smart London offices to remote country houses, from Cambridge in the early 1950s to a colony of voluntary artistic exiles in the South of Spain, and from Highgate to Jamaica and the USA, this new collection from Frederic Raphael is as incisive, original and enjoyable as we would expect from the author of Oxbridge Blues and The Glittering Prizes. A young couple abandon the rat-race for a pastoral idyll in 'The People in Euclid', until a disturbing new presence imposes upon their happiness - reminding them of what they escaped from, and inextricably linking his life with theirs. In 'Union Jack Development', the sad tale of Antonia and Stewart - pieced together from letters and diary fragments left in a drawer - casts a sinister aura over the magical Jamaican holiday house. After weeks of frantic preparation, the entire village of Torreroja - resplendent with flowers, coloured lights and with proud Mayor Don Antonio to the fore - all wait with rapt anticipation to honour 'the face with saved Spain for God' on 'The Day Franco Came'. We meet extraordinary characters from the worlds of film, theatre and literature - like Sherman Shapiro, 'The Old Pro', who offers a budding screenwriter his first chance to break into Hollywood, but whose own life turns out rather weak in the third act; Jake Nathanson, ebullient on his heady passage to eminence, and rather less spritely on is ay down in 'Quixote Shmixote'; and Magnis Molyneux, who in 'Seniority' addresses himself to his vocation - literature - with monastic severity. We see how quickly 'the moment passes', and how flattery, favours and auld acquaintances can conveniently be forgotten. Think of England is a stylish, subtle and highly accomplished collection in which Frederic Raphael displays his astute observation of human motives and his versatility at their very best.

Frederic Raphael's previous collections of short stories are Sleeps Six, which was originally commissioned for BBC Radio, and Oxford Blues, which was recently made into a successful television film series. His work also includes Heaven and Earth and The Glittering Prizes.

A versatile English novelist (The Glittering Prizes), short story writer (Oxbridge Blues) and biographer of Byron, Raphael has mastered the one-liner, the literary dig and the mockingly erudite reference, all used with relish in his latest collection of short stories. Nearly all concern the vagaries of a writer's life, most saunter intimately among the famous and the eccentric, and many make the reader laugh out loud. Some have O. Henry-like twists, like "A Kiss on the Cheek," in which a dazzling woman writer who condescendingly bid farewell to a much younger author seeks him out years later for professional advice. "A Long Story Short" and "The People in Euclid" concern lovers' triangles. The first introduces a man who leaves his wife, marries the other woman, but later meets his first wife at a party and has an affair with her; the second is the tale of a marriage into which an outsider intrudes so successfully that he ends up marrying the woman, only to suffer the equally intrusive presence of her first husband. "The Day Franco Came," a passionate indictment of the pomposity, greed and hypocrisy of petty officials in a dying Spanish town, is made more damning by its matter-of-factness and vivid setting. It is the finest story in a collection marked by urbanity, wit and sure mastery of material.
Copyright 1988 Reed Business Information, Inc.

Book Description Scribner's, 1988. Condition: Good. RELIABLE library withdrawal in the plastic, protective cover. Stamped at the page edge with a card pocket page on the inside. Light scuff to the plastic cover. This edition is PRESENTABLE!. Seller Inventory # HCLibNov20VI97

Book Description Scribner, 1988. Hardcover. Condition: Used; Good. Dispatched, from the UK, within 48 hours of ordering. This book is in good condition but will show signs of previous ownership. Please expect some creasing to the spine and/or minor damage to the cover. Inscription on the first page, typically just a name but may include a dedication or a brief personal message. Seller Inventory # CHL5162736

Book Description Scribner, 1988. Hardcover. Condition: Used; Good. Dispatched, from the UK, within 48 hours of ordering. This book is in good condition but will show signs of previous ownership. Please expect some creasing to the spine and/or minor damage to the cover. Ripped/damaged jacket. The dust jacket of this book is slightly damaged/ripped, however, this does not affect the internal condition. Seller Inventory # CHL5676180

Book Description New York, NY, U.S.A.: Charles Scribner's Sons, 1988, 1988. Very Good/Good. Fiction. 8vo - over 7ľ" - 9ľ" tall. ISBN:0-684-18972-0. This nice hardcover with a dustjacket is a series of short stories set in England and this copy is in excellent condition with little wear. The dustjacket is dark blue and light blue and features an illustrated black and white picture of the English countryside and a cottage on the front. The dustjacket looks great but has some wear on the back face and around the back edges. The blue and black hardcovers with gold lettering look great with little wear. The spine is tight. The pages are white with no wear or marks. The book is a stated first edition. 17 selections. 187 pages. CHEAP SHIPPING MEDIA MAIL!. Seller Inventory # 003388

Book Description Paperback. Condition: Good. The book has been read but remains in clean condition. All pages are intact and the cover is intact. Some minor wear to the spine. Seller Inventory # GOR005418745

Book Description -. Hardcover. Condition: Very Good. Think of England This book is in very good condition and will be shipped within 24 hours of ordering. The cover may have some limited signs of wear but the pages are clean, intact and the spine remains undamaged. This book has clearly been well maintained and looked after thus far. Money back guarantee if you are not satisfied. See all our books here, order more than 1 book and get discounted shipping. Seller Inventory # 7719-9780684189727

Book Description Scribner 01/03/1988, 1988. Hardcover. Condition: Very Good. Shipped within 24 hours from our UK warehouse. Clean, undamaged book with no damage to pages and minimal wear to the cover. Spine still tight, in very good condition. Remember if you are not happy, you are covered by our 100% money back guarantee. Seller Inventory # 6545-9780684189727