Items related to A Frolic of His Own

Gaddis, William A Frolic of His Own 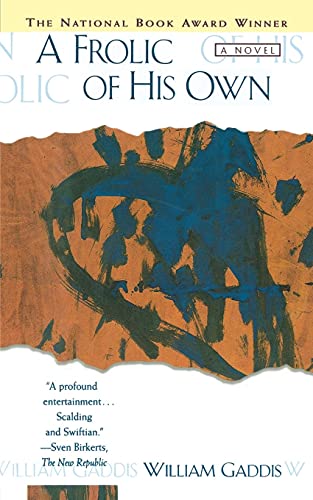 A dazzling fourth novel by the author of The Recognitions, Carpenter's Gothic, and JR uses his considerable powers of observation and satirical sensibilities to take on the American legal system. Reprint. 30, 000 first printing.

Perhaps William Gaddis' most accessible novel--though a dense and imposing book--A Frolic of His Own is a masterful work that mocks the folly of a litigious society. The story centers around Oscar Crease, the grandson of a Confederate soldier who avoided a deadly battle by invoking a legal clause that allowed him to hire a substitute and who later became a Supreme Court judge. Oscar writes a play about his grandfather that goes unproduced yet appears as the story behind a big-budget Hollywood film. Oscar sues and is tossed into the vortex of litigation. Meanwhile, almost 20 other lawsuits of varying frivolity swirl about, adding to this satirical and philosophical treat, which won the National Book Award for 1994.

Greed and its destruction of independent authenticity is Gaddis's best subject, and with it here he has essentially rewritten his masterpiece, JR (1975)--not so much with business as the focus (as in that earlier book) but with lawyers. A ne'er-do-well college instructor, Oscar Crease, has written a long, sludgy philosophical Civil War play that he once sent off desperately to a TV producer; years later, a Hollywood blockbuster movie seems to duplicate (though only in Crease's mind) some of the stuff in the play. Crease sues--plagiarism--and is promptly sucked down into wholesale legal disaster: depositions, bills, opinions, more bills, appeals, more bills, bills and bills. His half-sister Christina and her establishment law-firm partner husband try to steer him through--but everyone gets drowned in the tidal wave of litigiousness. Meanwhile, Crease's own elderly father, a federal judge, is, as a sidebar, a stereoscopic whack at the legal system, simultaneously ruling on a case involving a dog killed while stuck in a piece of public sculpture (the book's most mordantly funny set-piece). Here, like JR, the novel is one of voices that are remarkably faithful to the real patterns of speech--interrupted, trivial, saying most when no one else seems to be listening. Paragraphs of speeded-up narrative link the voices, which are also interspersed now and then with depositions and judicial opinions. Gaddis's paranoid comedy of skepticism (some of it fairly cheap: a director named Jonathan Livingston Siegel, a car company called Sosumi Motors) pushes relentlessly forward... ...but if you've read a quarter of the book, you've read the whole thing: clever and brilliant though it is, it feels like a massive imposition on your time. Gaddis seems to want to prove the novel capable of film's open mike and panning shots, music's structure, and opera's recitatives (everyone only screeches and beseeches)--but once he has, all that finally seems left is a rather tinny note of pissed-off energy and formal subordination. -- Copyright ©1993, Kirkus Associates, LP. All rights reserved.

A Frolic of His Own (Paperback)

A Frolic of His Own (Paperback)

FROLIC OF HIS OWN REPRINT Edition

Frolic of His Own (Paperback or Softback)

Frolic of His Own

Shipping: US$ 0.66
From United Kingdom to U.S.A.
Destination, rates & speeds