Items related to WAR WITHOUT BLOODSHED: The Art of Politics

WAR WITHOUT BLOODSHED: The Art of Politics 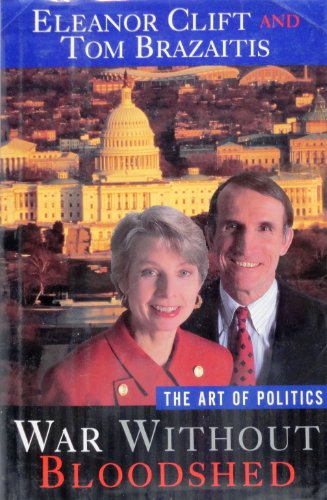 Welcome to the trenches of political combat. Eleanor Clift, a contributing editor at Newsweek and liberal voice on the "McLaughlin Group," and her husband, Tom Brazaitis, a columnist for The Cleveland Plain Dealer, navigate the converging headwaters of Washington politics to show how the game is and has been played. They target the failed health-care reform initiative of the Clinton Administration as their prime case study, detailing how polling, media, lobbyists and downright bullheaded elected officials derail the process. They also portray eight political professionals in this essential text for politics in the 1990s.

Eleanor Clift and Tom Brazaitis reveal that the political personality is not party-specific; and the political game is far from perfect. War Without Bloodshed: The Art Of Politics analyzes the Washington power structure through six key Capitol Hill positions and the eight exemplary individuals who fill them. Seasoned and knowledgeable journalists and political analysts The Pollsters are represented by Stanley Greenberg (who helped elect the first Democratic president in 12 years) and Frank Luntz (who field-tested the Republicans' "Contract With America") are among the best in the numbers game -- but there is only room for one at the top. The Lobbyists featured are Michael Bromberg (who took on Hillary Rodham Clinton's health care approach) and Paul Equale (the independent insurance agents' point man in Washington). The Chairman is Daniel Patrick Moynihan who either singlehandedly sabotaged the Clinton health plan or was the lone realist in his assessment of it. The Speaker is Newt Gingrich (who is either a visionary or a self-destructive denigrator of the House). The Member of Congress chosen is Maxine Waters (a woman, an African-American, a liberal -- a minority within a minority within a minority, and yet refuses to be marginalized). The Chief of Staff -- Sheila Burke (the top aide to Bob Dole and a yet a target of the Republican far right). War Without Bloodshed is "must" reading for all political observers of the Washington scene and brings the reader to a clearer understanding of "inside the beltway" politics! -- Midwest Book Review

The next time you wonder why so many popular, respected senators have decided to retire, you can turn to War Without Bloodshed for an unhappily satisfying explanation. -- The New York Times Book Review, Jeff Greenfield

1. WAR WITHOUT BLOODSHED: The Art of Politics Clift, Eleanor and Brazaitis, Tom

2. War Without Bloodshed : The Art of Politics

3. WAR WITHOUT BLOODSHED: The Art of Politics