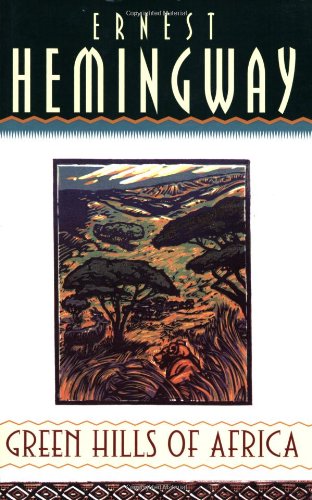 His second major venture into nonfiction (after Death in the Afternoon, 1932), Green Hills of Africa is Ernest Hemingway's lyrical journal of a month on safari in the great game country of East Africa, where he and his wife Pauline journeyed in December of 1933. Hemingway's well-known interest in -- and fascination with -- big-game hunting is magnificently captured in this evocative account of his trip. In examining the poetic grace of the chase, and the ferocity of the kill, Hemingway also looks inward, seeking to explain the lure of the hunt and the primal undercurrent that comes alive on the plains of Africa. Yet Green Hills of Africa is also an impassioned portrait of the glory of the African landscape, and of the beauty of a wilderness that was, even then, being threatened by the incursions of man.
Hemingway's rich description of the beauty and strangeness of the land and his passion for the sport of hunting combine to give Green Hills of Africa the freshness and immediacy of a deeply felt personal experience that is the hallmark of the greatest travel writing.

Ernest Hemingway did more to influence the style of English prose than any other writer of his time. Publication of The Sun Also Rises and A Farewell to Arms immediately established him as one of the greatest literary lights of the 20th century. His classic novella The Old Man and the Sea won the Pulitzer Prize in 1953. Hemingway was awarded the Nobel Prize for Literature in 1954. He died in 1961.