Items related to For Whom the Bell Tolls

Hemingway, Ernest For Whom the Bell Tolls 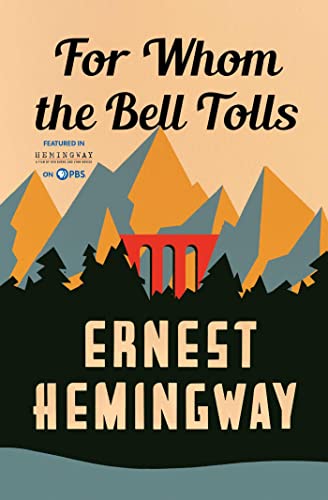 In 1937 Ernest Hemingway traveled to Spain to cover the civil war there for the North American Newspaper Alliance. Three years later he completed the greatest novel to emerge from "the good fight," For Whom the Bell Tolls.

The story of Robert Jordan, a young American in the International Brigades attached to an antifascist guerilla unit in the mountains of Spain, it tells of loyalty and courage, love and defeat, and the tragic death of an ideal. In his portrayal of Jordan's love for the beautiful Maria and his superb account of El Sordo's last stand, in his brilliant travesty of La Pasionaria and his unwillingness to believe in blind faith, Hemingway surpasses his achievement in The Sun Also Rises and A Farewell to Arms to create a work at once rare and beautiful, strong and brutal, compassionate, moving, and wise. "If the function of a writer is to reveal reality," Maxwell Perkins wrote Hemingway after reading the manuscript, "no one ever so completely performed it." Greater in power, broader in scope, and more intensely emotional than any of the author's previous works, it stands as one of the best war novels of all time.

For Whom the Bell Tolls begins and ends in a pine-scented forest, somewhere in Spain. The year is 1937 and the Spanish Civil War is in full swing. Robert Jordan, a demolitions expert attached to the International Brigades, lies "flat on the brown, pine-needled floor of the forest, his chin on his folded arms, and high overhead the wind blew in the tops of the pine trees." The sylvan setting, however, is at sharp odds with the reason Jordan is there: he has come to blow up a bridge on behalf of the antifascist guerrilla forces. He hopes he'll be able to rely on their local leader, Pablo, to help carry out the mission, but upon meeting him, Jordan has his doubts: "I don't like that sadness, he thought. That sadness is bad. That's the sadness they get before they quit or before they betray. That is the sadness that comes before the sell-out." For Pablo, it seems, has had enough of the war. He has amassed for himself a small herd of horses and wants only to stay quietly in the hills and attract as little attention as possible. Jordan's arrival--and his mission--have seriously alarmed him.

"I am tired of being hunted. Here we are all right. Now if you blow a bridge here, we will be hunted. If they know we are here and hunt for us with planes, they will find us. If they send Moors to hunt us out, they will find us and we must go. I am tired of all this. You hear?" He turned to Robert Jordan. "What right have you, a foreigner, to come to me and tell me what I must do?"

In one short chapter Hemingway lays out the blueprint for what is to come: Jordan's sense of duty versus Pablo's dangerous self-interest and weariness with the war. Complicating matters even more are two members of the guerrilla leader's small band: his "woman" Pilar, and Maria, a young woman whom Pablo rescued from a Republican prison train. Unlike her man, Pilar is still fiercely devoted to the cause and as Pablo's loyalty wanes, she becomes the moral center of the group. Soon Jordan finds himself caught between the two, even as his own resolve is tested by his growing feelings for Maria.

For Whom the Bell Tolls combines two of the author's recurring obsessions: war and personal honor. The pivotal battle scene involving El Sordo's last stand is a showcase for Hemingway's narrative powers, but the quieter, ongoing conflict within Robert Jordan as he struggles to fulfill his mission perhaps at the cost of his own life is a testament to his creator's psychological acuity. By turns brutal and compassionate, it is arguably Hemingway's most mature work and one of the best war novels of the 20th century. --Alix Wilber

For Whom the Bell Tolls Paperback