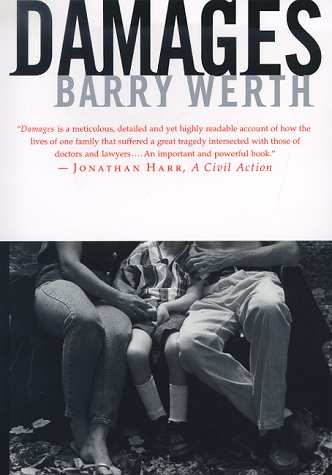 On April 1, 1984, Donna Sabia went into labor expecting twins. But one of the babies arrived stillborn, while the other--Anthony Jr.--was barely alive, with an Apgar score (rating newborn vitality on a scale of 0 to 10) of 1. In the following years, he suffered from spastic quadriplegia, cerebral palsy, and cortical blindness, and would require lifelong medical attention costing millions of dollars just to survive. The Sabias' lawyers faulted Donna's maternity clinic and the delivering physician for her son's condition, initiating a 7-year lawsuit on the claim that a simple $40 ultrasound could have eliminated incalculable suffering and catastrophic expense.

Damages is a careful analysis of how the fields of law and medicine intersect in the realm of medical malpractice, where lawyers sue not only to redress suffering but to make sure that doctors and hospitals are more vigilant in the future, if only to avoid being sued again. Werth leads readers carefully through the litigation, from the deposing of expert witnesses, through the preparation for trial, to the posturing of settlement negotiations. Always firmly aware that lawyers sue doctors on behalf of human beings, however, he reveals the emotional and psychological consequences of a civil justice system that is often neither civil nor just. Werth explains esoteric legal and medical procedures in understandable terms that laypeople will not find condescending, while describing the human side of the Sabias' case without patronizing attorneys and physicians. Ultimately, Damages is the chronicle of a devoted family braving a medical malpractice industry in which the decision-making process on both sides is governed by a cost-benefit analysis that leads, perhaps inevitably, to the commodification of human life. "Even after a big verdict," Werth quotes one malpractice lawyer, "I'm suffering because all I could get my clients, who've been brutalized by the most appalling malpractice, was money." --Tim Hogan

Barry Werth is an award-winning journalist and the acclaimed author of six books. His landmark first book, The Billion-Dollar Molecule, recounts the founding and early struggles of Vertex. Werth’s articles have appeared in The New Yorker, The New York Times Magazine, and GQ, among others. He has taught journalism and nonfiction writing at Smith, Mount Holyoke, and Boston University.