Items related to To Have and Have Not

Hemingway, Ernest To Have and Have Not

To Have and Have Not 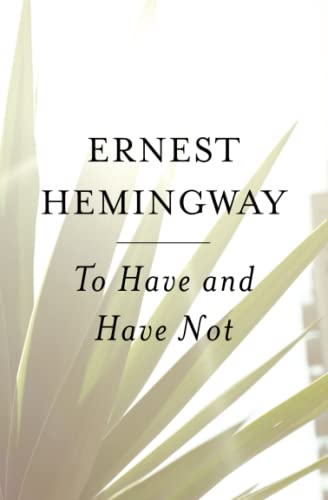 Hemingway's Classic Novel About Smuggling, Intrigue, and Love
To Have and Have Not is the dramatic story of Harry Morgan, an honest man who is forced into running contraband between Cuba and Key West as a means of keeping his crumbling family financially afloat. His adventures lead him into the world of the wealthy and dissipated yachtsmen who throng the region, and involve him in a strange and unlikely love affair.
Harshly realistic, yet with one of the most subtle and moving relationships in the Hemingway oeuvre, To Have and Have Not is literary high adventure at its finest.

First things first: readers coming to To Have and Have Not after seeing the Bogart/Bacall film should be forewarned that about the only thing the two have in common is the title. The movie concerns a brave fishing-boat captain in World War II-era Martinique who aids the French Resistance, battles the Nazis, and gets the girl in the end. The novel concerns a broke fishing-boat captain who agrees to carry contraband between Cuba and Florida in order to feed his wife and daughters. Of the two, the novel is by far the darker, more complex work.

The first time we meet Harry Morgan, he is sitting in a Havana bar watching a gun battle raging out in the street. After seeing a Cuban get his head blown off with a Luger, Morgan reacts with typical Hemingway understatement: "I took a quick one out of the first bottle I saw open and I couldn't tell you yet what it was. The whole thing made me feel pretty bad." Still feeling bad, Harry heads out in his boat on a charter fishing expedition for which he is later stiffed by the client. With not even enough money to fill his gas tanks, he is forced to agree to smuggle some illegal Chinese for the mysterious Mr. Sing. From there it's just a small step to carrying liquor--a disastrous run that ends when Harry loses an arm and his boat. Once Harry gets mixed up in the brewing Cuban revolution, however, even those losses seem small compared to what's at stake now: his very life.

Hemingway tells most of this story in the third person, but, significantly, he brackets the whole with a section at the beginning told from Harry's perspective and a short, heart-wrenching chapter at the end narrated by his wife, Marie. In between there is adventure, danger, betrayal, and death, but this novel begins and ends with the tough and tender portrait of a man who plays the cards that are dealt him with courage and dignity, long after hope is gone. --Alix Wilber

4. To Have and Have Not (Paperback or Softback)

Book Description Paperback or Softback. Condition: New. To Have and Have Not. Book. Seller Inventory # BBS-9780684818986