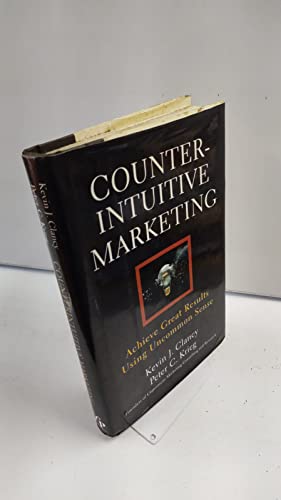 Why does American business seem to sputter along where it ought to thrive? What is the source of the current plague of downsizing, disappearing companies, dot-com crashes, and here-today-gone-tomorrow advertising campaigns? Why do more products flop than ever before? Marketing experts Kevin J. Clancy and Peter C. Krieg have the answers.

In Counterintuitive Marketing, Clancy and Krieg trace the high rate of business failure back to bad marketing strategy, and the even worse implementation of that strategy. Excess testosterone, they argue, compels senior managers to make decisions intuitively, instinctively, quickly, and, unfortunately, disastrously.

In this informative and enlightening book, Clancy and Krieg confront these "over-and-over-again" marketers, who don't have time to do it right the first time, but endless time and a company bankroll to do it wrong over and over again. The authors draw from their decades of consumer and business-to-business marketing experience to describe the intuitive decision-making practices that permeate business today, and demonstrate how these practices lead to disappointing performance.

Chapter by chapter, Counterintuitive Marketing contrasts how marketing decisions are made today with how they should be made. The authors give equal treatment to targeting, positioning, product development, pricing, customer service, e-commerce, marketing planning, implementation, and more as they present counterintuitive ideas for building and introducing blockbuster marketing programs.

Readers will discover in this iconoclastic treasure chest hundreds of penetrating insights that have enabled the authors' firm, Copernicus, to transform companies and become a "brand guardian" to the Fortune 500 and emerging businesses around the world. The tools to create exceptional marketing programs really do exist, and they are all here in Counterintuitive Marketing, the ultimate practical guide for any company of any size.

Kevin J. Clancy is Chairman, CEO, and co-founder of Copernicus Marketing Consulting and Research, a firm that provides marketing consulting and research services to Fortune 500 companies and emerging businesses worldwide. He is the co-author of The Marketing Revolution and Marketing Myths That Are Killing Business. He lives in Gloucester, Massachusetts.

Chapter One: Strategic Plan Your Way to Nowhere

Considered from one perspective, the 1990s were the best of times. A period of robust economic growth with thousands of new businesses creating hundreds of thousands -- millions -- of new jobs. A time of low interest rates, virtually nonexistent inflation, and a booming stock market and at the close of the decade rising corporate profits.

The phenomenal success of Internet companies has clouded our thinking about business. Tens of thousands of companies have been started. Billions of dollars invested. Market capitalizations greater than corporations with factories, tangible assets, and histories.

Considered from another perspective, the 1990s represented the worst of times. A time of corporate downsizing, Asian economies wracked by instability, workers on the brink of despair, and many great names suffering during a booming economy.

Coca-Cola's decline is a particularly sad story, although one that we believe might have been predicted based on observations we've made throughout this book. Coke announced in early February 2000 that it was cutting its work force by 20 percent -- around 6,000 jobs, including nearly half of those at Coke headquarters, Atlanta -- and shifting more power to executives abroad to try to boost sales around the world. The changes were the most dramatic in Coke's 114-year history.

For many of America's largest corporations, the 1990s were a period of negative organic growth. Entire industries suffered -- airlines, food services, property and casualty insurance, industrial and farm equipment, beverages, forest and paper products, railroads, health care, pipelines, building materials, glass, metals, petroleum refining, and entertainment. Even in 1998, when profits for the entire Fortune 500 were up over 23 percent, some industries were still showing profit declines: building materials and glass, forest and paper products, metals, publishing and printing, savings institutions, engineering and construction, electronics and electrical equipment, and motor vehicles.

Perhaps the most notable example of something amiss is the collapse of the Internet economy, which we began to see in the first quarter of 2000. Plagued by rising costs, stagnant sales, and modest to nonexistent profits, 70 percent (if not more) of the widely promoted Internet startups of the late 1990s are expected to be out of business within the next few years.

And how do businesses traditionally respond to sluggish growth and declining profits? By blaming the economy, downsizing the workforce, and making acquisitions.

Our point: It doesn't make any difference.

For the most part, both the companies that did not grow in the 1990s and many that did share a common failing: they do not know how to market their goods and services profitably. There is a yawning gap between promise and performance, one that we suspect will only widen if executives do not change.

NO MATTER WHAT Business Week SAYS,
P/E RATIOS ARE TOO HIGH

During the two years we have been working on this book, we have been predicting at every opportunity -- professional presentations, meetings with clients, cocktail parties -- that the stock market is on the verge of a significant correction or even collapse. We say this because we see little real growth. Businesses we have observed closely are, with a few exceptions, improving performance through mergers and acquisitions and through downsizing, not through successful marketing programs for established products and services or by introducing flourishing new products.

Then there are the Internet companies, which, despite poor or nonexistent profits, have watched their stock prices climb into the stratosphere: Amazon.com, AtHome, eBay, E*Trade Group, Excite, Infoseek, Lycos, and Yahoo!.

When price/earning ratios reached record heights, a Business Week magazine headline claimed, "They're not as loony as they look." Although the p/e ratio of Standard & Poor's 500-stock index stood at 26.7, almost 4 points higher than the historic 23 the index reached in the early 1990s, "Those p/e's didn't climb to Himalayan heights on mindless speculation," wrote the reporter, who said they are high for good reason: "Over the past three years, reported earnings have grown by more than 50 percent; long-term interest rates have fallen from 8 percent to less than 6 percent, even as gross domestic product expanded; and inflation has dropped from 3.3 percent to 1.4 percent."

Buttressing this argument, the magazine quoted a number of analysts. Edward M. Kerschner, PaineWebber Inc.'s chief investment strategist, argued that just because the long-term average price/earnings ratio was 15 (the actual number as we've calculated it is closer to 17), it is foolish to believe that p/e's must return to that average. "My average age is 23, but I'm never going to be 23 again," he said. "That 'reversion to the mean' thinking is a naive assumption. That was what investors did when they didn't have any better way to analyze the market, so you'd assume the average. With the computers and information we have today, you don't need to do that."

Despite the fact that Mr. Kerschner says "reversion" when he means "regression" (a statistical phenomenon studied for over a century) and that his comment on age is a non sequitur (it has nothing to do with his argument), he does raise an interesting question: Just because p/e ratios have held at around 17 to 1 for decades, does it mean they will be 17 to 1 forever?

In Dow 36,000, James Glassman and Kevin Hassett argue a resounding 'No!' They say that an appropriate p/e for stocks today is 100 to 1.

To Kerschner, Glassman, Hassett, and other stock market cheerleaders, we say "Whoa, hold on there." If there were underlying positive forces in the economy -- population increases, productivity increases, significantly improved trade deficits, rising corporate profits, real growth projected well into the future -- investors would be well advised to pay more for companies today than in the past. It would be rational to do so.

But when the future does not look significantly different from the recent past and the present, and when some economic factors are not what an investor would like to see, one has to wonder whether stock prices are simply irrational. Joseph Kennedy, Sr., is said to have remarked that when cab drivers and shoe shine boys are giving stock tips, it's time to get out of the market, which is how he avoided the crash of 1929.

We don't have to hearken back to 1929. We lived through the burgeoning stock and housing market of the 1970s and 1980s. People began buying because they expected significant appreciation. We watched the housing prices zoom at rates significantly higher than the stock market, only to collapse in 1988. It was recently reported that the Boston area's housing prices, for example, have just caught up to 1988's average.

Whatever the merits of our economic argument, it is hard to believe that a p/e ratio of 783, such as the one Yahoo! Inc. showed on June 15, 1999, or the Glassman-Hassett recommendation of 100 for the market generally, reflects anything more than the "greater fool theory." As you know, the theory holds that no matter what price an investor pays, someone with less sense will come along willing to pay an even higher price. Speculators use the greater fool theory to justify their gambling. A stock may be "fully valued" based on its balance sheet, but speculators believe new fools will drive the price up an