Items related to Republic of Dreams : Greenwich Village: The American... 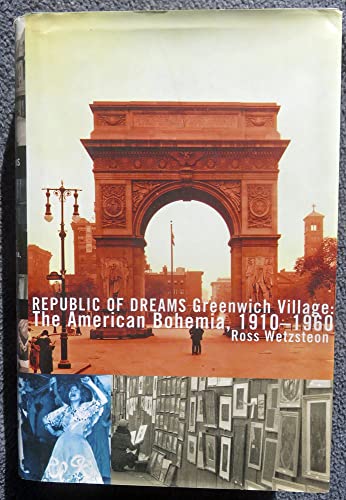 A thoughtful history of the legendary New York City neighborhood chronicles the Village's role as a bohemian enclave that became the home of and transformed the lives of such individuals as Edna St. Vincent Millay, Emma Goldman, Eugene O'Neill, Margaret Sanger, and Thomas Wolfe, who came to the neighborhood to pursue individual artistic, personal, and political dreams. 25,000 first printing.

New York's Greenwich Village, "the most significant square mile in American cultural history" and "home of half the talent and half the eccentricity in the country," is the subject of Ross Wetzsteon's Republic of Dreams, an enthusiastic and rigorous biography of place. From the Village sprung American socialism, gay liberation, the YMCA, the American Civil Liberties Union, The Reader's Digest, the phrase "I heard it through the grapevine," the Colt .45 revolver, and America's first night court, for starters. It was in the Village where Kahlil Gibran wrote The Prophet and the buffalo nickel was designed. Wetzsteon is primarily interested in the place between the years 1910 (when, he says, it became a "self-conscious bohemian and radical community") and 1960, when cultural boundaries "blurred" and the "hegemony of 'the normal'" disappeared. This is not a "walking tour" of famous hangouts so much as a portrait built on a chronological series of richly detailed biographies of Village denizens renowned, notorious, and relatively obscure, including Max Eastman, E.E. Cummings, Jackson Pollock and other abstract expressionists, a Who's Who of American feminists, Eugene O'Neill, and Mabel Dodge. Wetzsteon, who died in 1998, revels in the Village's inherent chaos, contradictions, and mutation, and never succumbs to "golden age" nostalgia. As his daughter writes in an afterword, "the Village is dead; long live the Village." Republic of Dreams, eminently readable, unflaggingly perceptive, and immaculately researched, is, arguably, the seminal study to date of America's most fertile literary, artistic, and political geographical dot. --H. O'Billovich

Ross Wetzsteon was a contributing editor at the Village Voice for thirty-two years. For twenty-eight years he was the chairman of the Voice's Obie Committee, which administered the Obie Awards, Off-Broadway theater's highest honor. He edited two drama collections, Fool for Love and Other Plays by Sam Shepard and The Best of Off-Broadway, and as a journalist and critic he wrote for many national publications, including The New York Times, New York magazine, and Condé Nast Traveler. Like many of the artists who populate Republic of Dreams, he came from somewhere else -- in his case, Montana -- but lived in Greenwich Village for all of his adult life. He died in 1998.