Rather, Dan; Herskowitz, Mickey The Camera Never Blinks Twice: The Further Adventures of a Television Journalist

The Camera Never Blinks Twice: The Further Adventures of a Television Journalist 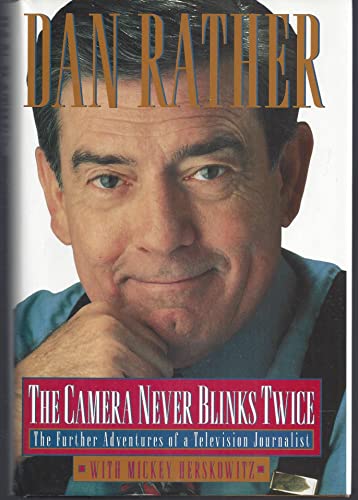 The co-anchor and managing editor of The CBS Evening News recounts his return to Vietnam with General Norman Schwarzkopf, describes his interview with Saddam Hussein during the Gulf Crisis, and relates his encounter with Mikhail Gorbachev on a Moscow thoroughfare. 150,000 first printing. $100,000 ad/promo.

A sequel to his 1976 memoir, the "CBS Evening News" anchor's reflections on the highlights of his career come across as downright nostalgic. Right away, Rather addresses the two most infamous incidents in which he played a central role: the six-minute walk-off when CBS stuck with a tennis match instead of going to news and the celebrated gloves-off confrontation with then-presidential candidate George Bush in 1988. Of the former, Rather takes ultimate responsibility for not being on the air while the network wrapped up tennis; of the latter, Rather's resentment of Bush's people for claiming the anchorman "ambushed" the vice-president is palpable. In fact, Rather has no problem slamming any of the most recent presidents, hurling brickbats at Kennedy, Nixon, Carter, Reagan, and Bush; he even takes a shot at Shirley Temple Black. Other chapters highlight the Soviet invasion of Afghanistan, the Chinese student revolt in Tiananmen Square, the fall of the Berlin Wall, and the events leading up to the Persian Gulf War. Finally, Rather includes the entire text of his less-than-complimentary speech to radio and television distributors last year. No matter what one thinks of his politics or his delivery, no one can question his honesty here (although he does not comment on his current pairing with Connie Chung on "CBS Evening News"). His book will be heavily in demand. Joe Collins

In this followup to The Camera Never Blinks, CBS anchorman Rather and veteran freelancer Herskowitz take us on a fast-paced and at times nerve-racking look at TV journalism on location. Rather details his harrowing trip to Afghanistan to witness the Soviet invasion of 1980. He recounts his notorious six-minute walkout on the Evening News in 1987 and tells of a confrontation with George Bush in 1988 (robust in victory, the Vice President declared: "He [Rather] makes Lesley Stahl look like a pussy"). There are tales of the Gulf War (and Rather's interview with Saddam Hussein); the events in Tiananmen Square; the hunger in Somalia; his "special" on Vietnam in 1993; and what happened to this White House correspondent when he overslept and President Nixon left on a trip without him. There are also candid and insightful profiles of William S. Paley, Eric Sevareid and Fidel Castro. Readers will find Rather's views refreshingly frank, direct and intense. Photos not seen by PW.
Copyright 1994 Reed Business Information, Inc.

1. The Camera Never Blinks Twice: The Further Adventures of a Television Journalist

2. The Camera Never Blinks Twice: The Further Adventures of a Television Journalist

3. The Camera Never Blinks Twice: The Further Adventures of a Television Journalist

4. The Camera Never Blinks Twice: The Further Adventures of a Television Journalist Rather, Dan and Herskowitz, Mickey