Items related to Ahab's Wife: Or, The Star-Gazer: A Novel

Naslund, Sena Jeter Ahab's Wife: Or, The Star-Gazer: A Novel

Ahab's Wife: Or, The Star-Gazer: A Novel 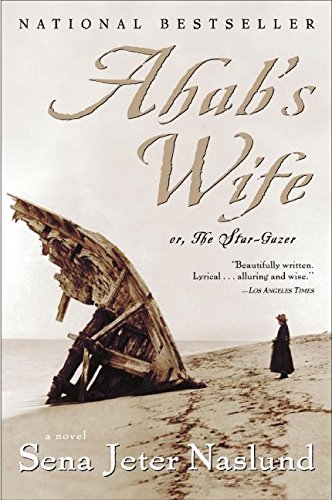 From the opening line--"Captain Ahab was neither my first husband nor my last"--you will know that you are in the hands of a masterful storyteller and in the company of a fascinating woman hero. Inspired by a brief passage in Melville's Moby-Dick, where Captain Ahab speaks passionately of his young wife on Nantucket, Una Spenser's moving tale "is very much Naslund's own and can be enjoyed independently of its source." (Newsday)

The daughter of a tyrannical father, Una leaves the violent Kentucky frontier for the peace of a New England lighthouse island, where she simultaneously falls in love with two young men. Disguised as a boy, she earns a berth on a whaling ship where she encounters the power of nature, death, and madness, and gets her first glimpse of Captain Ahab. As Naslund portrays Una's love for the tragically driven Ahab, she magnificently renders a real, living marriage and offers a new perspective on the American experience. Immediately immersed in this world, the reader experiences a brilliantly written, vibrant, uplifting novel--a bright book of life.

Ahab's Wife is being reprinted in Australia and England, translated into German, Hebrew, Spanish and Portuguese.

It has been said that one can see farther only by standing on the shoulders of giants. Ahab's Wife, Sena Naslund's epic work of historical fiction, honors that aphorism, using Herman Melville's Moby-Dick as looking glass into early-19th-century America. Through the eye of an outsider, a woman, she suggests that New England life was broader and richer than Melville's manly world of men, ships, and whales. This ambitious novel pays tribute to Melville, creating heroines from his lesser characters, and to America's literary heritage in general.

Una, named for the heroine of Edmund Spenser's Faerie Queene, flees to the New England coast from Kentucky to escape her father's puritanism and to pursue a more exalted life. She gets whaling out of her system early: going to sea at 16 disguised as a boy, Una has her ship sunk by her own monstrous whale, and survives a harrowing shipwreck:

I was so horrified by the whale's deliberate charge that I could not move. Then my own name flew up from below like a spear: "Una!" Giles' voice broke my trance, and I scrambled down the rigging. No sooner did my foot touch the deck than there was such a lurch that I fell to my face. I heard and felt the boards break below the waterline, the copper sheathing nothing but decorative foil. The whole ship shuddered. A death throe.

The ship dies, but Una returns to land to pursue the life of the mind. The novel's opening line--"Captain Ahab was neither my first husband nor my last"--also diminishes Melville's hero in the broader scheme of things. Naslund exposes the reader to the unsung, real-life heroes of Melville's world, including Margaret Fuller and her Boston salon, and Nantucket astronomer Maria Mitchell. There is a chance meeting with a veiled Nathaniel Hawthorne in the woods, and throughout the novel the story brims with references to the giants of literature: Shakespeare, Goethe, Coleridge, Keats, and Wordsworth. Although her novel runs long at nearly 700 pages, Naslund has created an imaginative, entertaining, and very impressive work. --Ted Leventhal About the Author:

Sena Jeter Naslund is a cofounder and program director of the Spalding University (Louisville) brief-residency MFA in Writing, where she edits The Louisville Review and Fleur-de-Lis Press. A winner of the Harper Lee Award and the Southeastern Library Association Fiction award, she is the author of eight previous works of fiction, including Ahab's Wife, a finalist for the Orange Prize. She recently retired from her position as Distinguished Teaching Professor at the University of Louisville.

Shipping: US$ 13.78
From United Kingdom to U.S.A.
Destination, rates & speeds