Items related to The Tombs of Atuan (The Earthsea Cycle, Book 2)

The Tombs of Atuan (The Earthsea Cycle, Book 2) 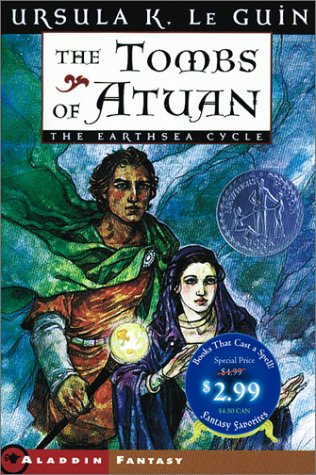 Arha's isolated existence as high priestess in the tombs of Atuan is jarred by a thief who seeks a special treasure.

Often compared to Tolkien's Middle-earth or Lewis's Narnia, Ursula K. Le Guin's Earthsea is a stunning fantasy world that grabs quickly at our hearts, pulling us deeply into its imaginary realms. Four books (A Wizard of Earthsea, The Tombs of Atuan, The Farthest Shore, and Tehanu) tell the whole Earthsea cycle--a tale about a reckless, awkward boy named Sparrowhawk who becomes a wizard's apprentice after the wizard reveals Sparrowhawk's true name. The boy comes to realize that his fate may be far more important than he ever dreamed possible. Le Guin challenges her readers to think about the power of language, how in the act of naming the world around us we actually create that world. Teens, especially, will be inspired by the way Le Guin allows her characters to evolve and grow into their own powers.

In this second book of Le Guin's Earthsea series, readers will meet Tenar, a priestess to the "Nameless Ones" who guard the catacombs of the Tombs of Atuan. Only Tenar knows the passageways of this dark labyrinth, and only she can lead the young wizard Sparrowhawk, who stumbles into its maze, to the greatest treasure of all. Will she?

Ursula K. Le Guin's Earthsea cycle has become one of the best-loved fantasies of our time. The windswept world of Earthsea is one of the greatest creations in all fantasy literature, frequently compared with J.R.R. Tolkien's Middle Earth or C.S. Lewis'Narnia. The magnificent saga begins with A Wizard Of Earthsea, continues in The Tombs Of Atuan and The Farthest Shore, and concludes with Tehanu --each book a treasure of wisdom, wonder, and literary wizardry. When she was still a child, Tenar was stripped of her name and family and dedicated as high priestess to the Nameless Ones, dark powers of The Tombs of Atuan. This is the tale of the young wizard, Ged, who came to the forbidden labyrinth to steal its greatest treasure--the Ring of Erreth-Akbe--and stayed to set Tenar free and lead her out of darkness.

1. The Tombs of Atuan (The Earthsea Cycle, Book 2)

2. The Tombs of Atuan (The Earthsea Cycle, Book 2)

Book Description Aladdin, 2002. Condition: Good. Ships from the UK. Shows some signs of wear, and may have some markings on the inside. Seller Inventory # GRP109000121

Shipping: US$ 14.80
From United Kingdom to U.S.A.
Destination, rates & speeds