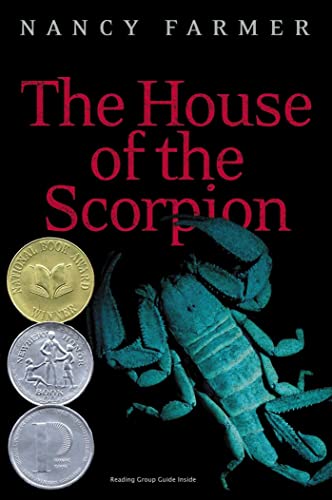 Matteo Alacrán was not born; he was harvested.
His DNA came from El Patrón, lord of a country called Opium--a strip of poppy fields lying between the United States and what was once called Mexico. Matt's first cell split and divided inside a petri dish. Then he was placed in the womb of a cow, where he continued the miraculous journey from embryo to fetus to baby. He is a boy now, but most consider him a monster--except for El Patrón. El Patrón loves Matt as he loves himself, because Matt is himself.

As Matt struggles to understand his existence, he is threatened by a sinister cast of characters, including El Patrón's power-hungry family, and he is surrounded by a dangerous army of bodyguards. Escape is the only chance Matt has to survive. But escape from the Alacrán Estate is no guarantee of freedom, because Matt is marked by his difference in ways he doesn't even suspect.

Fields of white opium poppies stretch away over the hills, and uniformed workers bend over the rows, harvesting the juice. This is the empire of Matteo Alacran, a feudal drug lord in the country of Opium, which lies between the United States and Aztlan, formerly Mexico. Field work, or any menial tasks, are done by "eejits," humans in whose brains computer chips have been installed to insure docility. Alacran, or El Patron, has lived 140 years with the help of transplants from a series of clones, a common practice among rich men in this world. The intelligence of clones is usually destroyed at birth, but Matt, the latest of Alacran's doubles, has been spared because he belongs to El Patron. He grows up in the family's mansion, alternately caged and despised as an animal and pampered and educated as El Patron's favorite. Gradually he realizes the fate that is in store for him, and with the help of Tam Lin, his bluff and kind Scottish bodyguard, he escapes to Aztlan. There he and other "lost children" are trapped in a more subtle kind of slavery before Matt can return to Opium to take his rightful place and transform his country.

Nancy Farmer, a two-time Newbery honoree, surpasses even her marvelous novel, The Ear, The Eye and the Arm in the breathless action and fascinating characters of The House of the Scorpion. Readers will be reminded of Orson Scott Card's Ender in Matt's persistence and courage in the face of a world that intends to use him for its own purposes, and of Louis Sachar's Holes in the camaraderie of imprisoned boys and the layers of meaning embedded in this irresistibly compelling story. (Ages 12 and older) --Patty Campbell

Nancy Farmer has written three Newbery Honor books: The Ear, the Eye and the Arm; A Girl Named Disaster; and The House of the Scorpion, which also won the National Book Award and the Printz Honor. Other books include The Lord of Opium, The Sea of Trolls, The Land of the Silver Apples, The Islands of the Blessed, Do You Know Me, The Warm Place, and three picture books for young children. She grew up on the Arizona-Mexico border and now lives with her family in the Chiricahua Mountains of Arizona.

The House of the Scorpion, 1st Edition

The House of the Scorpion

Book Description Paperback. Condition: New. Matteo Alacran was not born; he was harvested. His DNA came from El Patron, lord of a country called Opium - a strip of poppy fields lying between the United States and what was once called Mexico. As he struggles to understand his existence, Matt is threatened by a sinister cast of characters, and is surrounded by a dangerous army of bodyguards. Escape is the only chance he has to survive, though he's marked by his difference in ways he doesn't even suspect. Seller Inventory # 2436558

The House of the Scorpion

THE HOUSE OF THE SCORPION (HOUSE