Items related to The Seeing Stone 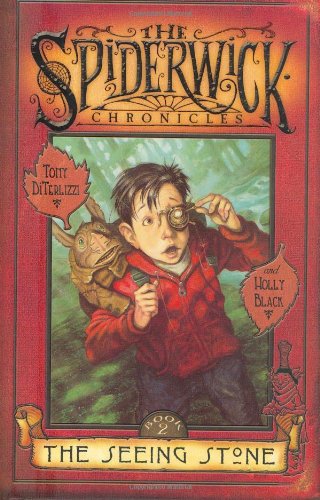 we said no
still you looked
now instead
someone gets cooked

In the Spiderwick Chronicles' second book, things get even more exciting--and kind of scary--for the Grace kids, as the strange faerie world hinted at in The Field Guide blooms to full life around them.

After making tentative peace with Thimbletack (a coveralled house brownie who's "the size of a pencil"), Jared chooses to ignore the creature's pleas that he destroy his great-great-uncle's mysterious tome, Arthur Spiderwick's Field Guide to the Fantastical World Around You. Thimbletack warns, "You kept the book despite my advice./Sooner or later there'll be a price." Sure enough, the brownie soon sniffs out a "fell smell in the air," and the disappearance of Simon's new cat starts to make sense. And if the chapter titled "IN WHICH Mallory Finally Gets to Put Her Rapier to Good Use" doesn't get your heart racing as fast as the kids', just wait till you get a load of the troll. ("Cooome baaack. I haaave something for youuu.")

The series' already-fast pace picks up quickly in the second installment, and we can begin to imagine what other sorts of trouble these three will turn up as they learn the rules to this odd (and dangerous) new world--while, of course, trying to explain away the strange goings-on to their mother. Next up, book three, Lucinda's Secret. (What's her secret? I want to know. Now! (Ages 6 to 10) --Paul Hughes

Holly Black is the author of bestselling contemporary fantasy books for kids and teens. Some of her titles include The Spiderwick Chronicles (with Tony DiTerlizzi), the Modern Faerie Tales series, the Curse Workers series, Doll Bones, The Coldest Girl in Coldtown, The Darkest Part of the Forest,  the Magisterium series (with Cassandra Clare), and the Folk of the Air series. She has been a finalist for the Mythopoeic Award, a finalist for an Eisner Award, and the recipient of both an Andre Norton Award and a Newbery Honor. She lives in New England with her husband and son in a house with a secret door. Visit her at BlackHolly.com.

Tony DiTerlizzi is a New York Times bestselling author and illustrator who has been creating books with Simon & Schuster for fifteen years. From his fanciful picture books like Jimmy Zangwow’s Out-of-this-World Moon Pie Adventure, Adventure of Meno (with his wife, Angela), and The Spider & The Fly (a Caldecott Honor book), to chapter books like Kenny and The Dragon and The Search for WondLa, Tony always imbues his stories with a rich imagination. His middle grade series, The Spiderwick Chronicles (with Holly Black), has sold millions of copies, been adapted into a feature film, and has been translated in more than thirty countries. You can visit him at DiTerlizzi.com.