Items related to A Great and Terrible Beauty

A Great and Terrible Beauty 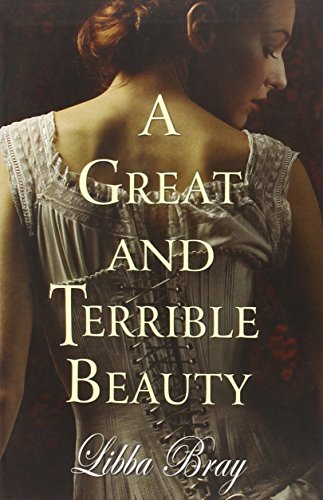 Following the death of her mother, 16 year-old Gemma Doyle is shipped off from her life in colonial India to a boarding school in England. Lonely and unhappy, she is prone to visions of the future that have an uncomfortable habit of coming true - and who is the mysterious young Indian man who keeps following her?

A Victorian boarding school story, a Gothic mansion mystery, a gossipy romp about a clique of girlfriends, and a dark other-worldly fantasy--jumble them all together and you have this complicated and unusual first novel.

Gemma, 16, has had an unconventional upbringing in India, until the day she foresees her mother’s death in a black, swirling vision that turns out to be true. Sent back to England, she is enrolled at Spence, a girls’ academy with a mysterious burned-out East Wing. There Gemma is snubbed by powerful Felicity, beautiful Pippa, and even her own dumpy roommate Ann, until she blackmails herself and Ann into the treacherous clique. Gemma is distressed to find that she has been followed from India by Kartik, a beautiful young man who warns her to fight off the visions. Nevertheless, they continue, and one night she is led by a child-spirit to find a diary that reveals the secrets of a mystical Order. The clique soon finds a way to accompany Gemma to the other-world realms of her visions "for a bit of fun" and to taste the power they will never have as Victorian wives, but they discover that the delights of the realms are overwhelmed by a menace they cannot control. Gemma is left wi! th the knowledge that her role as the link between worlds leaves her with a mission to seek out the "others" and rebuild the Order. A Great and Terrible Beauty is an impressive first book in what should prove to be a fascinating trilogy. (Ages 12 up) –Patty Campbell

It?s 1895, and after the suicide of her mother, 16-year-old Gemma Doyle is shipped off from the life she knows in India to Spence, a proper boarding school in England. Lonely, guilt-ridden, and prone to visions of the future that have an uncomfortable habit of coming true, Gemma?s reception there is a chilly one. To make things worse, she?s been followed by a mysterious young Indian man, a man sent to watch her. But why? What is her destiny? And what will her entanglement with Spence?s most powerful girls?and their foray into the spiritual world?lead to?