Items related to Making Peace with the 60s

Making Peace with the 60s 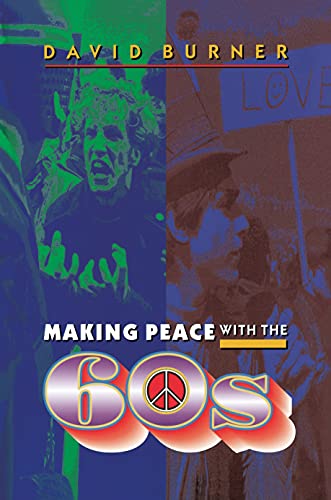 David Burner's panoramic history of the 1960s conveys the ferocity of debate and the testing of visionary hopes that still require us to make sense of the decade. He begins with the civil rights and black power movements and then turns to nuanced descriptions of Kennedy and the Cold War, the counterculture and its antecedents in the Beat Generation, the student rebellion, the poverty wars, and the liberals' war in Vietnam. As he considers each topic, Burner advances a provocative argument about how liberalism self-destructed in the 1960s. In his view, the civil rights movement took a wrong turn as it gradually came to emphasize the identity politics of race and ethnicity at the expense of the vastly more important politics of class and distribution of wealth. The expansion of the Vietnam War did force radicals to confront the most terrible mistake of American liberalism, but that they also turned against the social goals of the New Deal was destructive to all concerned.

Liberals seemed to rule in politics and in the media, Burner points out, yet they failed to make adequate use of their power to advance the purposes that both liberalism and the left endorsed. And forces for social amelioration splintered into pairs of enemies, such as integrationists and black separatists, the social left and mainline liberalism, and advocates of peace and supporters of a totalitarian Hanoi.

Making Peace with the 60s will fascinate baby boomers and their elders, who either joined, denounced, or tried to ignore the counterculture. It will also inform a broad audience of younger people about the famous political and literary figures of the time, the salient moments, and, above all, the powerful ideas that spawned events from the civil rights era to the Vietnam War. Finally, it will help to explain why Americans failed to make full use of the energies unleashed by one of the most remarkable decades of our history.

For Burner, "the history of the 1960s is the history of the breaking apart of the liberal mentality," particularly with reference to the two intersecting mass actions of the decade, the civil rights and anti-war movements. To understand that breakup, Burner "examines forces of the era that might have been allies but succeeded in becoming enemies: a civil rights movement that severed into integrationist and black-separatist; a social left and a mainline liberalism that lost a common vocabulary even for arguing with each other; an anti-war activism that divided between advocates of peace and advocates of totalitarian Hanoi."

Burner's strength is his unflinching willingness to draw the continuities in such developments, even as it pains him to do so. Where more reverential histories try to parse out the bad from the good, Burner shows how the two were intimately, if not always necessarily, related. With considerable success, he charts how a civil rights movement stressing the content of character melded into the radical chic of black separatism and armed insurrection and how liberals prosecuted a "progressive" war on poverty at home while simultaneously waging a "reactionary" war in Vietnam.

. . . Burner's own left-liberalism allows for--perhaps creates--blind spots. Throughout Making Peace with the 60s, he draws no distinction between public and private spheres and consistently conflates government action with society as a whole. In an epilogue, he romanticizes the New Deal as a time of national purpose, "a sense of a wider community," and laments the lack of such national coherence now. While such tics are bothersome, they make the book all the more convincing. Even as Burner laments the demise of big government liberalism, Making Peace with the 60s painstakingly details where and why things went wrong.

"The 1990s continue to be haunted by the 1960s. In this lively, thought-provoking visit to the sixties, David Burner helps us understand why so many of the idealistic aspirations of that decade were disappointed and what we might do to recover them."--William E. Leuchtenburg, William Rand Kenan Professor, University of North Carolina at Chapel Hill

"In this lively, thought-provoking revisit to the sixties, David Burner helps us understand why so many of the idealistic aspirations of that decade were disappointed and what we might do to recover them."--William Leuchtenburg