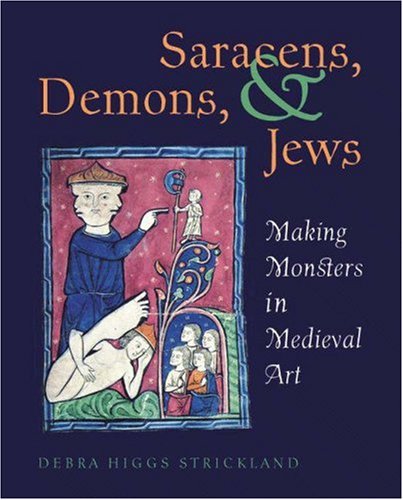 During the crusades, Ethiopians, Jews, Muslims, and Mongols were branded enemies of the Christian majority. Illustrated with strikingly imaginative and still disturbing images, this book reveals the outrageously pejorative ways these rejected social groups were represented--often as monsters, demons, or freaks of nature. Such monstrous images of non-Christians were not rare displays but a routine aspect of medieval public and private life. These images, which reached a broad and socially varied audience across western Europe, appeared in virtually all artistic media, including illuminated manuscripts, stained glass, sculpture, metalwork, and tapestry.

Debra Higgs Strickland introduces and decodes images of the "monstrous races," from demonlike Jews and man-eating Tartars to Saracens with dog heads or animal bodies. Strickland traces the origins of the negative pictorial code used to portray monsters, demons, and non-Christian peoples to pseudoscientific theories of astrology, climate, and physiognomy, some dating back to classical times. She also considers the code in light of contemporary Christian eschatological beliefs and concepts of monstrosity and rejection.

This is the first study to situate representations of the enemies of medieval Christendom within the broader cultural context of literature, theology, and politics. It is also the first to explore the elements of that imagery as a code and to elucidate the artistic means by which boundaries were effectively blurred between imaginary monsters and rejected social groups.

"Strickland has done an outstanding job of synthesizing the earlier literature, grounding it historically, and introducing fresh observations and ideas. She draws on a great range of primary and secondary sources to produce a study that will be useful not only to art historians but to scholars in medieval history, literature, and religion."--Anne Derbes, author of Picturing the Passion in Late Medieval Italy

"This book presents a multidimensional view of medieval social rejection as depicted in varied embodiments of 'the monstrous' in medieval art and iconography. The way that Strickland reads her images is refreshing. Historically well informed, she connects her selection of images to the actual problems confronting many historians in today's multicultural world. Scholars, teachers, and students will take to her reader-friendly prose. And that near-mythical creature--the general reader--will be attracted by the freak show--like, even underworld appeal of this book's evil creatures."--Gary Dickson, author of Religious Enthusiasm in the Medieval West

Debra Higgs Strickland teaches art history at Edinburgh University and is a Research Fellow of the Graduate School of Arts and Divinity at Glasgow University. Her previous books, published under the name of Debra Hassig, include Medieval Bestiaries: Text, Image, Ideology and The Mark of the Beast.