Items related to A World Ruled by Number: William Stanley Jevons and... 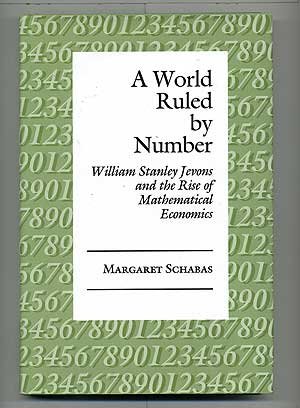 Jevons's Principles of Science (1874) was the first book to take issue with John Stuart Mill's faith in inductive reasoning, to assimilate George Boole's mathematical logic, and to discern many of the limitations that beset scientific inquiry. Together with a renewed appreciation for Bentham's utility calculus, these philosophical insights served to convince Jevons and his followers that the economic world is fundamentally quantitative and thus amenable to mathematical analysis.

Margaret Schabas is professor and head of philosophy at the University of British Columbia. She is the author of "The Natural Origins of Economics" and the co-editor, with Neil de Marchi, of" Economies in the Age of Newton".

"Schabas has argued cogently that Jevons's economic theory was shaped by his views on logic and scientific method, and A World Ruled by Number constitutes a strong demonstration that the investigation of the development of economics gains much from a broadened perspective." (Economics and Philosophy)

2. A World Ruled by Number: William Stanley Jevons and the Rise of Mathematical Economics

4. A WORLD RULED BY NUMBER: WILLIAM