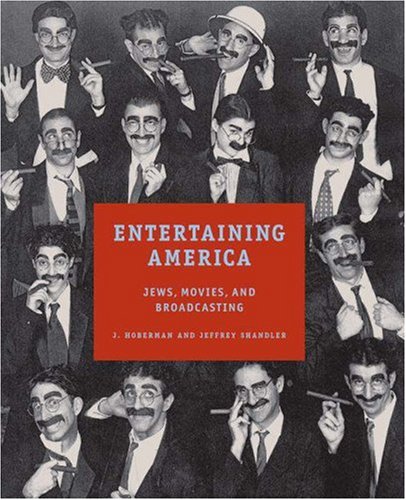 Entertaining America is a captivating look at one of the longest-running and most provocative public discussions in America: the relationship between the nation's Jews and its entertainment media. This colorfully written, lavishly illustrated book surveys how Jews have participated in--and been identified with--American movies, radio, and television from the nickelodeon era at the turn of the twentieth century to the present day.

Throughout, the tone is lively, the design is playful, and key points are visually enhanced by stills, publicity photos, and memorabilia. This anthology of original analyses and primary texts covers a wide range of topics, including the multiple versions of The Jazz Singer, the saga of the Hollywood movie moguls, the irrepressible Goldbergs of radio and television fame, the representation of the Holocaust, how Charlie Chaplin and other non-Jewish stars became "virtual Jews," and the dazzling success of the television series Seinfeld. There is also an illustrated gallery of more than twenty Jewish-American stars from Theda Bara to Adam Sandler.

The principal authors, J. Hoberman and Jeffrey Shandler, examine not only the history of Jews in the industry but also the steady stream of richly varied voices that have had something to say about this history--in fan magazines as well as literary fiction, by religious and political leaders as well as journalists, historians, and Jews in the entertainment business themselves.

Entertaining America, which accompanies an exhibition opening at The Jewish Museum, is itself tremendously entertaining while providing the most expansive, authoritative look at this fascinating subject. In its pages, readers will find ample material to help them formulate their own responses to this frank, contentious, multilayered discussion.

The Jewish Museum of Maryland, Baltimore

"Entertaining America brings together in a single volume, as does no other existing work, not only a wide range of questions about the role of Jews in the American entertainment media but valuable new insights and perspectives on both familiar and little-known aspects of its central theme. It is itself entertaining as well as informative. Accessible, well written, always sound and often original in scholarship, it will reach a wide readership beyond those who attend the exhibition, and will certainly be useful in courses that explore the role of Jews in popular culture and entertainment."--Robert Sklar, author of A World History of Film

J. Hoberman is the senior film critic for The Village Voice and an adjunct professor of film at Cooper Union. His books include Bridge of Light: Yiddish Film between Two Worlds and The Red Atlantis: Communist Culture in the Absence of Communism. Jeffrey Shandler is Assistant Professor of Jewish Studies at Rutgers University. He is the author of While America Watches: Televising the Holocaust.