Items related to Freedom and Its Betrayal: Six Enemies of Human Liberty

Freedom and Its Betrayal: Six Enemies of Human Liberty 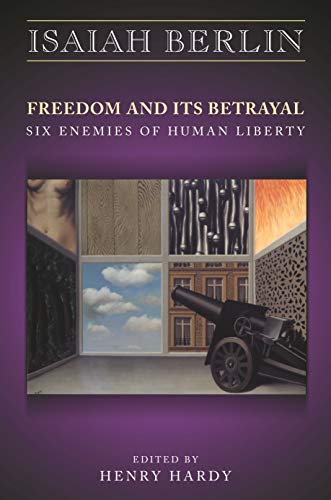 Isaiah Berlin's celebrated radio lectures on six formative anti-liberal thinkers were broadcast by the BBC in 1952. They are published here for the first time, fifty years later. They comprise one of Berlin's earliest and most convincing expositions of his views on human freedom and on the history of ideas--views that later found expression in such famous works as "Two Concepts of Liberty," and were at the heart of his lifelong work on the Enlightenment and its critics. Working with BBC transcripts and Berlin's annotated drafts, Henry Hardy has recreated these lectures, which consolidated the forty-three-year-old Berlin's growing reputation as a man who could speak about intellectual matters in an accessible and involving way.

In his lucid examination of sometimes complex ideas, Berlin demonstrates that a balanced understanding and a resilient defense of human liberty depend on learning both from the errors of freedom's alleged defenders and from the dark insights of its avowed antagonists. This book throws light on the early development of Berlin's most influential ideas and supplements his already published writings with fuller treatments of Helvétius, Rousseau, Fichte, Hegel, and Saint-Simon, with the ultra-conservative Maistre bringing up the rear. These thinkers gave to freedom a new dimension of power--power that, Berlin argues, has historically brought about less, not more, individual liberty.

These lectures show Berlin at his liveliest and most torrentially spontaneous, testifying to his talents as a teacher of rare brilliance and impact. Listeners tuned in expectantly each week to the hour-long broadcasts and found themselves mesmerized by Berlin's astonishingly fluent extempore style. One listener, a leading historian of ideas who was then a schoolboy, was to recount that the lectures "excited me so much that I sat, for every talk, on the floor beside the wireless, taking notes." This excitement is at last recreated here for all to share.

The Isaiah Berlin lectures collected in this volume were originally aired on BBC radio in 1952. They appear here in print for the first time, thanks to editor Henry Hardy, who produced these fine essays from BBC transcripts and Berlin's own notes. It is perhaps better to read Berlin than hear him; as Hardy points out in his introduction, the late thinker had the unfortunate habit of speaking rapidly. A contemporary once said he was "the only man who pronounces 'epistemological' as one syllable." Yet they are a joy to have in any form, as Berlin is a clear and crisp communicator of ideas. Political theory is not always the most engaging subject matter, but on these pages Berlin makes it accessible as he probes the legacies of "six thinkers who were hostile to liberty"--namely Helvetus, Rousseau, Fichte, Hegel, Saint-Simon, and Maistre. He doesn't exactly beat around the bush. Rousseau, he writes, "claims to have been the most ardent and passionate lover of human liberty who ever lived." But Berlin's own verdict is quite different: He "was one of the most sinister and most formidable enemies of liberty in the whole history of modern thought." Reading these jarring essays is like listening to a favorite college professor lecture on a topic he knows well. --John Miller

"[Berlin's] lecturing style . . . proved enormously successful as broadcasting. . . . [H]undreds of thousands of people tuned in . . . to listen to fiendishly difficult hour-long talks, delivered in clipped, rapid-fire Oxford accent. These were the lectures that led Eliot, in his barbed way, to congratulate Isaiah for his 'torrential eloquence'; and the conservative Michael Oakeshotte to praise him, in equally barbed fashion, as 'the Paganini of the platform'. . . . The conventional signs of public attention poured in: anonymous ladies knitted him red socks; cranks sent him manuscripts. . . . The head of [the BBC's] Radio 3 hailed the talks as a landmark in British broadcasting, and they were certainly a landmark in Berlin's life. The search to find his own intellectual vocation had been a central preoccupation since his return from the war. With the broadcast of 'Freedom and Its Betrayal, ' that struggle resolved itself. . . . He had become a public intellectual--in the Russian mould, but in an English idiom."--Michael Ignatieff, Isaiah Berlin: A Life

"This is one of the most important books on the history of ideas in Berlin's oeuvre. The lectures are clearer than many of his later writings and are extremely compelling. Berlin was convinced that, for all its praise of liberty, the Enlightenment was in fact hostile to it, and that the Counter-Enlightenment offered sounder intellectual grounds for defending and extending liberty. Even those who disagree with this diagnosis of modern thought will have to confront it."--Mark Lilla, University of Chicago

1. Freedom and Its Betrayal: Six Enemies of Human Liberty

3. Freedom and Its Betrayal: Six Enemies of Human Liberty