Items related to The Impossibility of Religious Freedom

The Impossibility of Religious Freedom 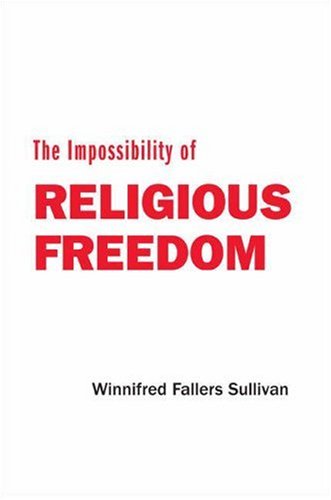 The Constitution may guarantee it. But religious freedom in America is, in fact, impossible. So argues this timely and iconoclastic work by law and religion scholar Winnifred Sullivan. Sullivan uses as the backdrop for the book the trial of Warner vs. Boca Raton, a recent case concerning the laws that protect the free exercise of religion in America. The trial, for which the author served as an expert witness, concerned regulations banning certain memorials from a multiconfessional nondenominational cemetery in Boca Raton, Florida. The book portrays the unsuccessful struggle of Catholic, Protestant, and Jewish families in Boca Raton to preserve the practice of placing such religious artifacts as crosses and stars of David on the graves of the city-owned burial ground.

Sullivan demonstrates how, during the course of the proceeding, citizens from all walks of life and religious backgrounds were harassed to define just what their religion is. She argues that their plight points up a shocking truth: religion cannot be coherently defined for the purposes of American law, because everyone has different definitions of what religion is. Indeed, while religious freedom as a political idea was arguably once a force for tolerance, it has now become a force for intolerance, she maintains.

A clear-eyed look at the laws created to protect religious freedom, this vigorously argued book offers a new take on a right deemed by many to be necessary for a free democratic society. It will have broad appeal not only for religion scholars, but also for anyone interested in law and the Constitution.

"This is a remarkably fine work that discusses the way religion is perceived and dealt with in the United States. The subject is of great moment not only in America but also in the world at large, and Sullivan has treated it with considerable analytical skill and ethnographic detail. The result is a powerful and convincing argument."--Talal Asad, City University of New York Graduate Center

"Provocative. Engaging. Valuable. Sullivan has created a kind of analytical triptych that captures some of the most important features of religions and law in the United States. It is a finely crafted portrait of an incredibly suggestive trial, a meditation on the political/legal status of folk religions in the United States, and a theoretical intervention into contemporary studies of religion jurisprudence."--Jason Bivins, North Carolina State University.

"The Impossibility of Religious Freedom is an astonishing book. Winnifred Sullivan once again demonstrates her flair for extracting a big lesson from a seemingly small event--in this book, a controversy over the allowable style of grave markers in a public cemetery in Boca Raton, Florida. To the town, the issue was the ease of mowing the cemetery and making it look tidy; for the survivors of the dead buried in the cemetery the issue was the appropriate expression of religious faith. This case looks like a simple church-state controversy, but Sullivan (an expert witness in the case) deftly explains why the federal court and the First Amendment really cannot cope with the issues involved. Separating church and state requires defining what religion is. The devil here is in the definition. Sullivan offers an important challenge to the easy assumptions to the current propensity of federal courts to accommodate religion. What is religion anyway? Read this fascinating story to see how challenging that question is."--Stanley N. Katz, Princeton University

"Sullivan's exploration of unofficial religion is elegant, moving, uncompromising, and profoundly important. By examining religion literally from the ground up, it challenges all of the familiar pieties about religious liberty in America."--Philip Hamburger, author of Separation of Church and State

Winnifred Fallers Sullivan is associate professor of law and director of the Law and Religion Program at the University at Buffalo Law School. She is also the author of Paying the Words Extra: Religious Discourse in the Supreme Court of the United States.

1. The Impossibility of Religious Freedom