Items related to The Nature of Space and Time (Princeton Science Library)... 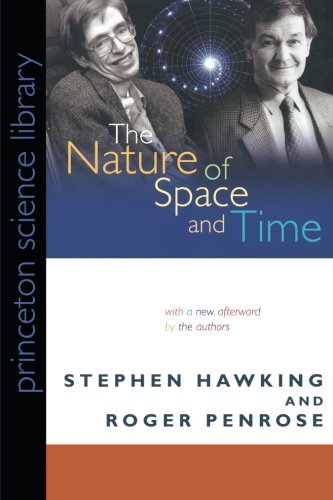 Einstein said that the most incomprehensible thing about the universe is that it is comprehensible. But was he right? Can the quantum theory of fields and Einstein's general theory of relativity, the two most accurate and successful theories in all of physics, be united in a single quantum theory of gravity? Can quantum and cosmos ever be combined? On this issue, two of the world's most famous physicists-Stephen Hawking (A Brief History of Time) and Roger Penrose (The Emperor's New Mind and Shadows of the Mind)-disagree. Here they explain their positions in a work based on six lectures with a final debate, all originally presented at the Isaac Newton Institute for Mathematical Sciences at the University of Cambridge. How could quantum gravity, a theory that could explain the earlier moments of the big bang and the physics of the enigmatic objects known as black holes, be constructed? Why does our patch of the universe look just as Einstein predicted, with no hint of quantum effects in sight? What strange quantum processes can cause black holes to evaporate, and what happens to all the information that they swallow? Why does time go forward, not backward? In this book, the two opponents touch on all these questions. Penrose, like Einstein, refuses to believe that quantum mechanics is a final theory. Hawking thinks otherwise, and argues that general relativity simply cannot account for how the universe began. Only a quantum theory of gravity, coupled with the no-boundary hypothesis, can ever hope to explain adequately what little we can observe about our universe. Penrose, playing the realist to Hawking's positivist, thinks that the universe is unbounded and will expand forever. The universe can be understood, he argues, in terms of the geometry of light cones, the compression and distortion of spacetime, and by the use of twistor theory.

Who doesn't love a good argument? When physics heavyweights Stephen W. Hawking and Roger Penrose delivered three sets of back-and-forth lectures capped by a final debate at Cambridge's Isaac Newton Institute, the course of modern cosmological thinking was at stake. As it happens, The Nature of Space and Time, which collects these remarks, suggests that little has changed from the days when Einstein challenged Bohr by refusing to believe that God plays dice. The math is more abstruse, the arguments more refined, but the argument still hinges on whether our physical theories should be expected to model reality or merely predict measurements.

Hawking, clever and playful as usual, sides with Bohr and the Copenhagen interpretation and builds a strong case for quantum gravity. Penrose, inevitably a bit dry in comparison, shares Einstein's horror at such intuition-blasting thought experiments as Schrödinger's long-suffering cat--and scores just as many points for general relativity. The math is tough going for lay readers, but a few leaps of faith will carry them through to some deeply thought-provoking rhetoric. Though no questions find final answers in The Nature of Space and Time, the quality of discourse should be enough to satisfy the scientifically curious. --Rob Lightner

2. The Nature of Space and Time (New in Paper) (Princeton Science Library)

4. The Nature of Space and Time

Shipping: US$ 43.73
From United Kingdom to U.S.A.
Destination, rates & speeds