Items related to Impossible Subjects: Illegal Aliens and the Making... 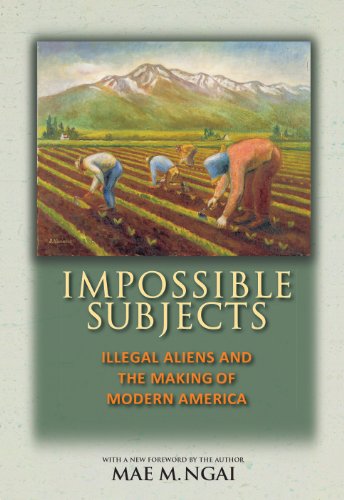 This book traces the origins of the "illegal alien" in American law and society, explaining why and how illegal migration became the central problem in U.S. immigration policy―a process that profoundly shaped ideas and practices about citizenship, race, and state authority in the twentieth century. Mae Ngai offers a close reading of the legal regime of restriction that commenced in the 1920s―its statutory architecture, judicial genealogies, administrative enforcement, differential treatment of European and non-European migrants, and long-term effects. She shows that immigration restriction, particularly national-origin and numerical quotas, remapped America both by creating new categories of racial difference and by emphasizing as never before the nation's contiguous land borders and their patrol.

"While vernacular discussion of the so-called 'illegal alien' in the United States has generally fixed on the alien side of the equation, Mae Ngai's luminous new book focuses rather on the illegal--the bureaucratic and ideological machinery within legislatures and the courts--that has created a very particular kind of pariah group. Impossible subjects is a beautifully executed and important contribution: judicious yet impassioned, crisply written, eye-opening, and at moments fully devastating. All of which is to say, brilliant. Would that such a story need not be told."--Matthew Frye Jacobson, Yale University, author of Barbarian Virtues: the United states Encounters Foreign Peoples at Home and Abroad, 1876-1917

"In Impossible Subjects' Mae Ngai has written a stunning history of U.S. immigration policy and practice in that often forgotten period, 1924-1965. Employing rich archival evidence and case studies, Ngai marvelously shows how immigration law was used as a tool to fashion American racial policy particularly toward Asians and Mexicans though the differential employment of concepts such as "illegal aliens," "national origins," and "racial ineligibility to citizenship". For those weaned on the liberal rhetoric of an immigrant America this will be a most eye-opening read."--Ramón A. Gutiérrez, author, When Jesus Came, the Corn Mothers Went Away: Marriage, Sexuality and Power in New Mexico, 1500-1848.

"Impossible Subjects' makes an outstanding contribution to U.S. histories of race and citizenship. Ngai's excellent discussions of the figure of the illegal alien, and laws regarding immigration and citizenship, demonstrate the history of U.S. citizenship as an institution that produces racial differences. This history explains why struggles over race, immigration, and citizenship continue today."--Lisa Lowe, UC San Diego, author of Immigrant Acts: On Asian American Cultural Politics

"At the cutting edge of the new interdisciplinary and global immigration history, Ngai unpacks the place of 'illegal aliens' in the construction of modern American society and nationality. Theoretically nuanced, empirically rich, and culturally sensitive, the book offers a powerful vista of how the core meaning of 'American' was shaped by those--Filipinos, Mexicans, Chinese,and Japanese--held in liminal status by the law."--David Abraham, Professor of Law, University of Miami

1. Impossible Subjects: Illegal Aliens and the Making of Modern America (Politics and Society in Twentieth-Century America)

3. Impossible Subjects: Illegal Aliens and the Making of Modern America (Politics and Society in Twentieth-Century America)

4. Impossible Subjects: Illegal Aliens and the Making of Modern America (Politics and Society in Twentieth-Century America)