Items related to My Africa: Sunshine and Hailstones

My Africa: Sunshine and Hailstones 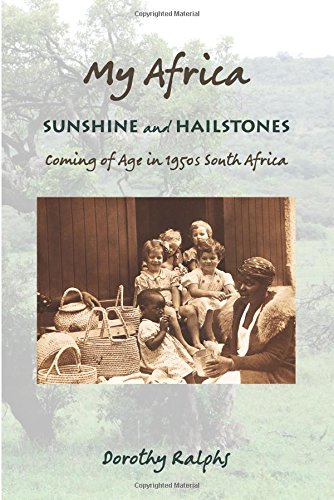 A poignant coming of age tale of a young white girl in 1950s South Africa, on the cusp of Apartheid. At the age of three, when her father goes off to war, Dorothy Ralphs and her family leave Albert Falls and move to her grandmother's house in Durban. At seven and a half, when her father returns, they uproot twice again before settling on Merryfield Farm. Unable to sustain a living from the land after a series of hardships, they leave her beloved farm and say goodbye to the Zulu families who remain. Changing schools in Pietermaritzburg, she must forge new friendships yet again. While pursuing a career in nursing, true love comes along and forever changes the course of her life. Filled with humor and insights, joy and tears, Ralphs transports the reader to the land of her heart.

Born in South Africa, Dorothy Ralphs came to America as a newly wed in 1958. Like her ancestors who left the place of their birth to seek opportunity in a new land, Dorothy and her husband arrived in Hoboken, NJ to begin a life together. Making their way across the country in a 1950s trailer pulled by her new father-in-law's 1956 Packard, they finally settled in California and established a printing business. Since then Dorothy has raised three children and now lives in Huntington Beach. When not spending time with her grandchildren, she can be found on the golf course, actively involved in the community or traveling. Her memoir My Africa: Sunshine and Hailstones chronicles her family history and personal experiences coming of age in South Africa.

1. My Africa: Sunshine and Hailstones