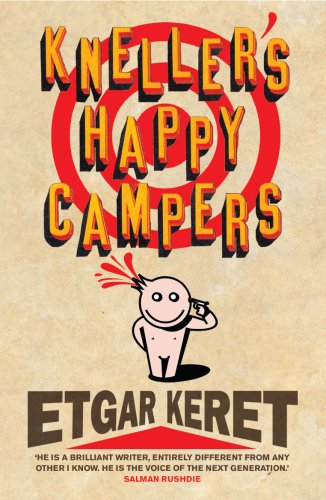 Born in Tel Aviv in 1967, Etgar Keret is one of the leading voices in Israeli literature and cinema. He is the author of five bestselling collections, which have been translated into twenty-nine languages. His writing has been published in the New York Times, le Monde, the Guardian, the Paris Review and Zoetrope. He has also written a number of award-winning screenplays, and Jellyfish, the first film that he directed -along with his wife Shira Geffen - won the Camera d'Or prize for best first feature at Cannes in 2007. In 2010 he was awarded the Chevalier medallion of France's Order of Arts and Letters.

"Etgar Keret's writing hits like a bullet. Kneller's Happy Campers is fast and bizarre and full of a fearless street-punk surrealism, as though Charles Bukowski is channelling the imagination of Lewis Carroll. The darkest fun I've read in ages" -- Matt Haig "Keret mixes the laconic style of Raymond Carver and the insane wit of Quentin Tarantino into his own particular, melancholy combination of themes... It's not just a story about people who have taken their lives, but rather a metaphor on how the post-ideological generation is trying to live and survive in this world" * Spiegel * "There is a subtle mix of innocence and awareness, of caustic irony and tender humour that emerges from this text, as well as from its brilliant author" * Le Monde * "I think he is a brilliant writer, entirely different from any other I know. He is the voice of the next generation" -- Salman Rushdie

Book Description Paperback. Condition: New. Language: English. Brand new Book. Kneller's Happy Campers is a strange, dark but funny tale set in a world very much like our own but it's an afterlife populated by people who have killed themselves - many of them are young, and most of them bear the marks of their death. bullet wounds, broken necks.(those who have over-dosed are known as 'Juliets'). When Mordy, our hero, discovers that his girlfriend from his life before has also 'offed' herself, he sets out to find her, and so follows a strange adventure. Full of the weird and wonderful characters, and the slightly surreal twist of events that we've come to expect from Etgar Keret, this novella is full of humour and comic flashes, but it is also wistful, longing for a better world and perfect love. Seller Inventory # AAZ9780701184315

Shipping: US$ 16.74
From United Kingdom to U.S.A.
Destination, rates & speeds