Items related to Your Children Will Be Next: Bombing and Propaganda...

Stradling, Robert Your Children Will Be Next: Bombing and Propaganda in the Spanish Civil War, 1936-1939

Your Children Will Be Next: Bombing and Propaganda in the Spanish Civil War, 1936-1939 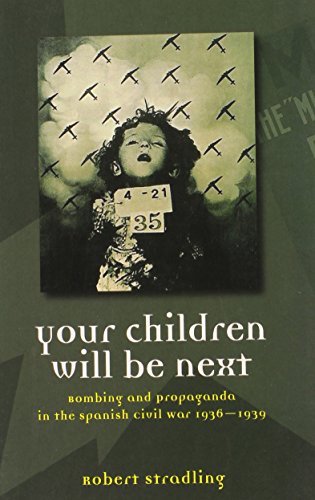 Baghdad, Kandahar, Jakarta—not to mention Dresden, Hiroshima, Hanoi: the mass killing of civilians as collateral damage, especially as the result of air bombardment, represents one of the most emotional and ethically urgent issues in the contemporary world. Many experts in the field see the civil war that tore apart Spain as the original site of this “new kind of war,” as George Steer, reporting on the bombing of Guernica, christened it. Your Children Will Be Next centers on the bombing of Getafe, a small town south of Madrid, shortly after that war’s outbreak—when Nationalist rebels advancing on the capital launched air raids on targets that unfortunately included this suburban township, where thirty young children were killed. The claims of the Republican government produced not only the celebrated poster—“If You Tolerate This Your Children Will Be Next”—but also a worldwide propaganda campaign that stimulated support for the Spanish republic. The core of this thought-provoking book is a meticulous account of the alleged atrocity of Getafe that is presented as part of a wide-ranging survey of both sides’ conduct in the matter, as well as the reactions of politicians, soldiers, reporters, writers, and artists. Appealing to anyone with an interest in European history, as well as in the potent powers of media and propaganda, Your Children Will Be Next is guaranteed to stimulate lively debate on a powerful and controversial topic.

Robert Stradling is professor emeritus of history at Cardiff University. He is a leading authority on the Spanish Civil War who has published extensively on the topic and made a number of documentaries for Spanish television and BBC Wales.

'Stradling's meticulous examination is a significant contribution to the historiography. His examination of the Gernika devastation is also excellent. His coverage of the lesser-known Nationalist air attacks on Lerida, Granollers, and Alicante is exemplary.' Michael Seidman, English Historical Review, Oct 2009 "An...excellent new book..."Stanley G. Payne, La Razon 'This book represents an excellent study of the Spanish Civil War: an impressive synthesis of the literatures on memory, propaganda and war. This is a well written, informative and scholarly book that deserves a wide readership for those interested in the phenomenon of war and the human experience.' R. Gerald Hughes, Planet, Issue 191

1. Your Children Will be Next: Bombing and Propoganda in the Spanish Civil War (Paperback)

Book Description University of Wales Press, United Kingdom, 2008. Paperback. Condition: New. Language: English. Brand new Book. This book centres on the bombing of Getafe, a small town south of Madrid shortly after the outbreak of the Spanish Civil War. Sections of the international press reported that forty or more children had been killed by bombs dropped in the Nationalist cause, a tragedy encapsulated in a poster issued by the Ministry of Propaganda. Accompanied by the words "If You Tolerate This Your Children Will Be Next", the poster linked Hitler and Nazi Germany with Franco's ruthless determination to overcome resistance and destroy the Republic. In the eyes of millions outside Spain, the poster helped to explain Madrid's heroic resistance to "International Fascism". The book establishes the central importance of the Getafe incident and goes on to analyse "collateral damage" inflicted by air-forces on both sides during the war, and aims to question what Prof. Stradling considers to be the continuing pro-Republican bias of historical writing on the war. It also discusses reactions in the UK and other European countries. Using the iconic poster as a focus, the book also covers other types of propaganda, including examples in art (Picasso's Guernica), literature, music, photography and film. The book will be unique in that it will be the first to analyse the Getafe incident in detail. Seller Inventory # AAR9780708320945

2. Your Children Will be Next

3. Your Children Will Be Next

5. Your Children Will be Next

6. Your Children Will be Next: Bombing and Propoganda in the Spanish Civil War