Items related to Dante the maker 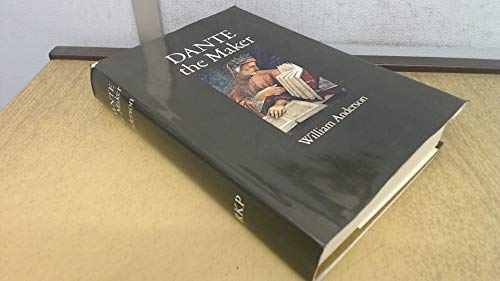 William Anderson (1935-1997) was a poet and author of many books, including Dante the Maker, Green Man, and The Rise of the Gothic. A historian by training, he worked for years on the Nuffield foundation Science and Mathematics Projects. This helped to direct his already strong interest in the nature of creativity in science, which connected with his abiding concern with the source of creativity both in the individual writer or artist, and on the larger scale of civilization.

The life of Dante is the kind of story that reminds us why history and biography are so important to what we do. Even with all the gaps, with all the unanswered and unanswerable questions, the story is so rich in detail and meaning that it cannot fail to excite and disturb us, outrage and inspire us. And William Anderson has told it in such a way as to let it produce all these effects. His enthusiasm for Dante and the Commedia is irrepressible; it shines through practically every page of his long, eloquent, and in the best sense of the word personal book. --R. A. Shoaf, Speculum

"[William] Anderson is also concerned with Dante as a poet, with the transformation of all the material of his life, his world, his education, into the poem. This encyclopedic study follows Dante's life and work more or less chronologically, attempting to give the reader a sense of contemporary history, science, religion, and literature-in short everything Dante might have experienced and drawn upon.... the author has consulted many early as well as modern sources, and I am sure that scholars will find new references in areas they do not know well. ...I find intriguing the suggestions that Dante might have known the works of Hildegard of Bingen, that he attempted a proto-Commedia in canzone form, that the De vulgari eloquentiai is constructed in a series of descending triads, even if some of the details do not seem to fit. There are also many interesting anecdotes in the historical passages, and many enlightening observations in the literary criticism, e.g., the treatment of the spiral journey in Purgatory, as opposed to the movements in Hell and Paradise, the statement that in Paradise every movement of the blessed is transfigured into art, that Peter's image of the sewer feeding human sin to Satan recapitulates the cosmology of the poem. Perhaps the author's basic assumption--with which I entirely agree--that the Comedy was conceived as a whole, with a detailed plan before it was written, led to his attempt to fit every aspect of Dante's life and culture at each stage into a particular place in that plan, which inevitably created some distortions. Perhaps his attempt, as a poet, to understand and explain the process of creation makes his study more subjective than one expects in Dante studies." --Joan M. Ferrante, Renaissance Quarterly