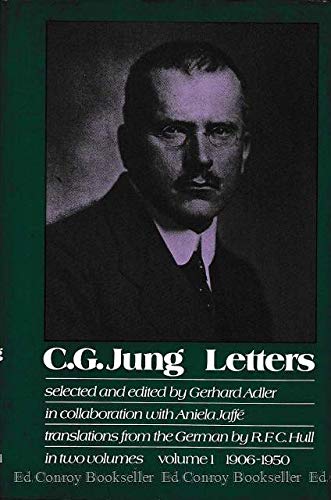 Beginning with Jung's earliest correspondence to associates of the psychoanalytic period and ending shortly before his death, the 935 letters selected for these two volumes offer a running commentary on his creativity. The recipients of the letters include Mircea Eliade, Sigmund Freud, Esther Harding, James Joyce, Karl Kernyi, Erich Neumann, Maud Oakes, Herbert Read, Upton Sinclair, and Father Victor White.

Over many years Jung had frequently used the medium of letters to communicate his ideas to the outside world and to rectify misinterpretations about which he felt sufficiently strong, quite apart from answering people who approached him with genuine problems of their own and corresponding with friends and professional colleagues. In this way many of his letters contained new creative ideas and a running commentary on his work.

Book Description Hardback. Condition: Very Good. The book has been read, but is in excellent condition. Pages are intact and not marred by notes or highlighting. The spine remains undamaged. Seller Inventory # GOR005082620

Book Description Taylor & Francis Books Ltd, 1973. Condition: Good. A+ Customer service! Satisfaction Guaranteed! Book is in Used-Good condition. Pages and cover are clean and intact. Used items may not include supplementary materials such as CDs or access codes. May show signs of minor shelf wear and contain limited notes and highlighting. Seller Inventory # 0710075812-2-4

Book Description Routledge, 1973. Hardcover. Condition: Good. Previous owners name inside the front page Good condition is defined as: a copy that has been read but remains in clean condition. All of the pages are intact and the cover is intact and the spine may show signs of wear. The book may have minor markings which are not specifically mentioned. Most items will be dispatched the same or the next working day. Seller Inventory # mon0012277302