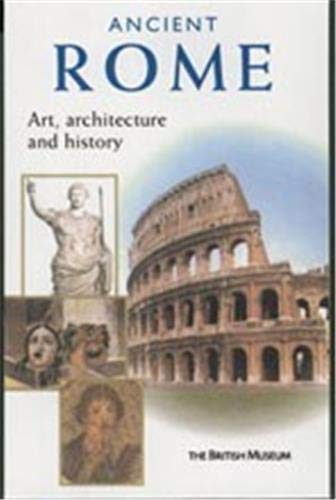 Rome continues to be the monumental expression of a legend. It is the eternal city where all roads of the ancient world converged, and through the millennia has been the model for the very concept of a universal empire. Through art, architecture, and urban planning, the empire expanded with an exceptional synthesis of technology, politics, law, and propaganda, conquering Europe, the Mediterranean, and the Near East. Accompanied by masterpieces of architecture, sculpture and painting and the words of illustrious figures, Ancient Rome: Art, Architecture, and History follows the arc of the city and its civilization from their beginnings to their height and decline. Included are discussions of the emperor Augustus; the Julio-Claudian dynasty; the ill-fated town of Pompeii; the architecture and planning of the metropolis; the art and architecture of the provinces of Europe and North Africa; and the fall of the Western Empire and the establishment of the Byzantine Empire as the heir of Rome.

Ada Gabucci is the editor of the magisterial study The Colosseum, also from Getty Publications.

Book Description British Museum Press. Paperback. Condition: Good. A copy that has been read, but remains in clean condition. All pages are intact, and the cover is intact. The spine may show signs of wear. Pages can include limited notes and highlighting, and the copy can include previous owner inscriptions. At ThriftBooks, our motto is: Read More, Spend Less. Seller Inventory # G0714122343I3N00

Book Description British Museum Press. Paperback. Condition: Very Good. A copy that has been read, but remains in excellent condition. Pages are intact and are not marred by notes or highlighting, but may contain a neat previous owner name. The spine remains undamaged. At ThriftBooks, our motto is: Read More, Spend Less. Seller Inventory # G0714122343I4N00

Book Description British Museum Press, 2002. Trade Paperback. Condition: Very Good. Copy has light wear along edges including a mild crease at bottom corner of front cover. Top of textblock has small faint stain. Price sticker on back. Pages of text are clean, bright and free of markings. Binding is tight and secure. ***Ships today or next business day. Our books are carefully described and packaged in boxes (not envelopes). A gift card and personalized message can be included upon request.*** Size: 8.25x5.25. Seller Inventory # 218459

Book Description Paperback. Condition: Very Good. The book has been read, but is in excellent condition. Pages are intact and not marred by notes or highlighting. The spine remains undamaged. Seller Inventory # GOR001183664

Book Description Paperback. Condition: Good. The book has been read but remains in clean condition. All pages are intact and the cover is intact. Some minor wear to the spine. Seller Inventory # GOR005388553

Book Description British Museum Press, 2002. Paperback. Condition: Very Good. No markings. WE ARE PROCESSING ORDERS AS NORMAL DURING THIS VIRUS EPIDEMIC, ALL ITEMS ARE SENT BY ROYAL MAIL. DISPATCHED FROM THE UK WITHIN 24 HOURS ( BOOKS ORDERED OVER THE WEEKEND DISPATCHED ON MONDAY) BY ROYAL MAIL. ALL OVERSEAS ORDERS SENT BY AIR MAIL. WE ALSO ACCEPT PAYMENT IN US DOLLARS OR EURO BY BANK TRANSFER. Seller Inventory # mon0000677487