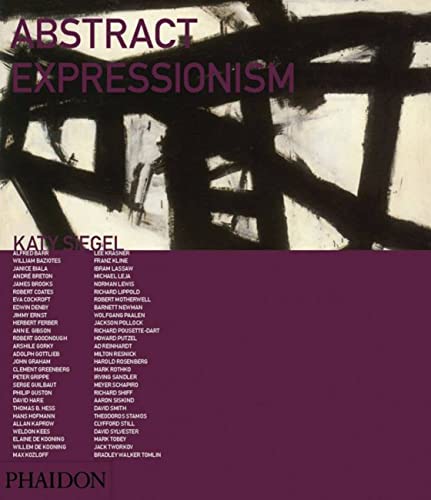 Abstract Expressionism emerged in New York in the years immediately following the Second World War and quickly became one of the most powerful and influential movements in the history of modern art.  Building on developments in European avant-garde art of the preceding decades, a wave of artists such as Willem de Kooning, Jackson Pollock, Barnett Newman and Clyfford Still developed a new abstraction that was simultaneously elemental and sophisticated.  Though several of Abstract Expressionism's key figures were emigres, including Mark Rothko, Hans Hofmann and Arshile Gorky, it was art's first definitively American movement, establishing New York as the new capital of artistic innovation for years to come while creating a visual language that would soon reach to the farthest corners of the globe.

Editor Katy Siegel has assembled a complete overview of the subject in three sections.  The definitive Survey recounts in detail the movement's emergence, high period and later accomplishments, incorporating both contemporaneous critical writing and up-to-the-minute scholarship. The Works section presents large full-colour images of over 200 key artworks, each accompanied by an informative caption.  And the Documents section provides a generous archive of primary and secondary texts, including artist's statements, exhibition reviews and critical writings.  The extensive back matter includes biographies on all the artists and authors plus a full bibliography.

Katy Siegel is Professor of Art History and Criticism at Hunter College in New York, where she specializes in post-war art. A Contributing Editor at Artforum, where her articles have included features on Andreas Gursky, Lee Lozano and Kerry James Marshall, she has written exhibition catalogue essays for institutions including the San Francisco Museum of Modern Art, the Musée d'Art Moderne de la Ville de Paris and the Hannover Kunstverein.  In 2006 she organized the exhibition 'High Times Hard Times: New York Painting 1967-75', which toured the United States, Mexico, Austria and Germany