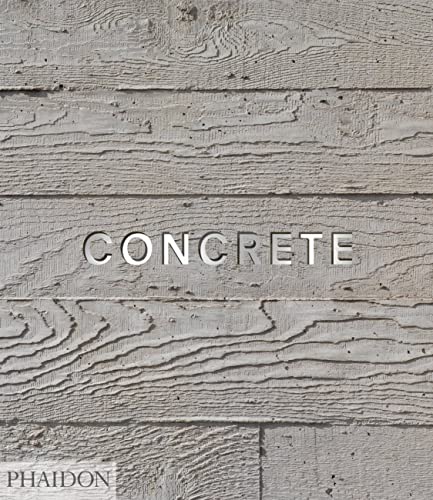 'Concrete' presents a visual exploration of the aesthetics of concrete architecture through 180 structures from ancient Rome to the present day. The book includes innovative and inspirational projects from monuments and churches to stations and cultural spaces, by some of the best architects of the last 100 years.

William Hall trained at Central Saint Martins and began his career in the office of the minimalist architect John Pawson. Formerly a Design Director at Phaidon Press, Hall now runs his own design practice in London, working with clients such as Calvin Klein, Henry Moore Institute and Tate. Leonard Koren has written and designed a number of books including Wabi-Sabi for Artists, Designers, Poets & Philosophers. In 1976, two years after studying architecture at UCLA, he founded WET, one of the premier avant-garde publications of the 1970s. He now consults on the subject of design, aesthetics, and communications. He lives in San Francisco.

"Yes, concrete can be cold and imposing - but as the 175 structures in [Concrete] attest, it can also be colorful, playful, and delicate." - The Wall Street Journal

"The book is a vivid reminder of the sheer endurance, unexpected delicacy, and humor of architecture's humble hero." - Architectural Digest

". . .this book isn't about the bad, it's about proving, as Leonard Koren writes in the introduction, that concrete is a noble material." - The Atlantic Monthly, Atlantic Cities blog

"The material may commonly be associated with drab, rain-stained affordable housing. But, as a new book from Phaidon proves, concrete can sing." - Fast Company

"A gorgeously bound book, Concrete offers invaluable and fascinating insight into this dynamic material and the forms it has been used to create." - Life + Times

"From the formidable fortress of Cold War-era Eastern Europe to fluid structures in South America, the uniquely adaptive materials tends to take on the emotion of its surroundings. In either design direction, however, the result is beautifully intriguing. . .a beautiful monograph from Phaidon." - Cool Hunting