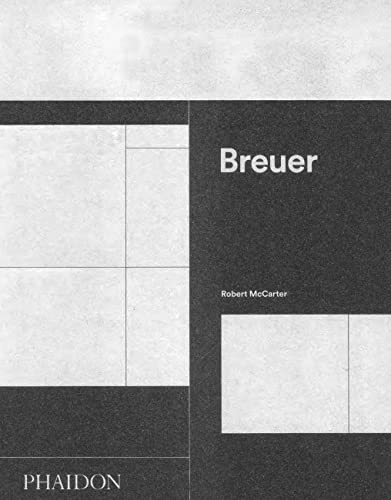 The most comprehensive book on architect and designer Marcel Breuer (1902-1981), looking in detail at all the houses, furniture, and public buildings he designed In Europe and the United States–from his beginning at the Bauhaus through his collaboration with Walter Gropius, and the establishment of his own practice in the USA.

Robert McCarter is a practicing architect and has been Ruth and Norman Moore Professor of Architecture at Washington University in St. Louis since 2007. He taught previously at the University of Florida, where he was Director of the School of Architecture from 1991?2001, and Columbia University, among other schools. He has written for numerous international publications, and his books include: Grafton Architects (2018); Marcel Breuer (2016); Steven Holl (2015); Alvar Aalto (2014); Carlo Scarpa (2013); Understanding Architecture, co-authored with Juhani Pallasmaa (2012); and Louis I Kahn (2005), all by Phaidon Press. He has also published The Work of MacKay-Lyons Sweetapple Architects: Economy as Ethic (2017); The Space Within: Interior Experience as the Origin of Architecture (2016); and Aldo van Eyck (2015), among other books.

"Breuer's tough, brutalist designs were sculptural and expressive, and their ambition and scale has come back into fashion. This is a serious study." —Financial Times

"It is truly a must-own for all architectural enthusiasts." —Interview Online

"In a beautiful new tome from Phaidon, architect Robert McCarter gives us the most complete monograph of the pioneering modernist." —Fast Company's Co.Design

"An impressive and weighty new monograph by Robert McCarter... Should realign Breuer's position in the canon of modern masters... Covers 100 buildings and 24 furniture designs, and is a joy to spend time over, with its beautiful array of photographs, and McCarter's exhaustive - but never exhausting - text on the designs... It is time to rightfully rank Breuer alongside Mies, Wright and Le Corbusier, and this publication should aid that cause." —The Irish Times

"This impressive and weighty new monograph by Robert McCarter should go some way to realigning Breuer's position in the canon of modern masters." —TLS (Times Literary Supplement)

"Meaty, well-illustrated... [Breuer] knew how to wield the expressive powers of modern materials." —The Observer, The New Review