Items related to Republican Internment and the Prison Ship Argenta 1922 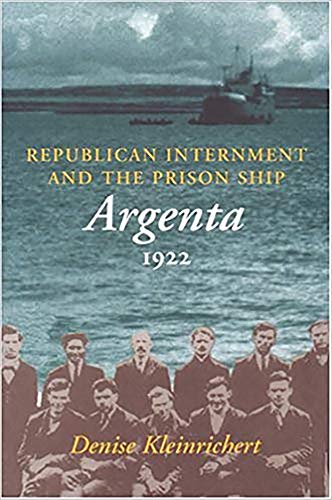 Argenta Legacies encapsulates the essence of internment in daily lives beginning in May 1922. Deluged under the British partition and formation of the Northern Government, nationalists were overwhelmingly affected. In an attempt to subvert the nationalist economic position, the Minister of Home Affairs, Dawson Bates, imposed martial law tactics to rend supremacy over both a rural and urban populous through violence, intimidation and economic sanctions. The saga has never been told in its entirety. Mere paragraphs and footnotes have decided the fate of the men and women as that deserving of 'Sinn Feiners'. 300 men were arrested within a 24-hour period beginning near midnight on 22 May 1922, almost all nationalist and pro-Treaty but with professional and economic status within their respective communities. Over 900 men and women in the North were eventually ordered lifted by James Craig, Prime Minister of Northern Ireland, under the Civil Authorities (Special Powers) Act between the years 1922 and 1925. The analysis of the detention without legal recourse has spanned over three years of research of public and private archives. Interviews with former internees and countless descendants of internees provide an interesting exposĂ?Â?Ă?Â©. The words, writings and drawings of innumerable men interned aboard the prison ship, S.S. Argenta, together with those at Larne Workhouse Camp unfold the miseries of a two-year ordeal. The lives of the internees were impacted beyond their captivity. Malnourishment, disease and death, physical abuse, public abandonment, hunger strike, prayer and escape bids served to foment the direction of their lives. This chronicle is an important historical reflection for nationalists, republicans and the politically astute in both Ireland and the United States. Scores of internees emigrated. Tragedy and human rights issues remain. Tremendous visual images relay the story.